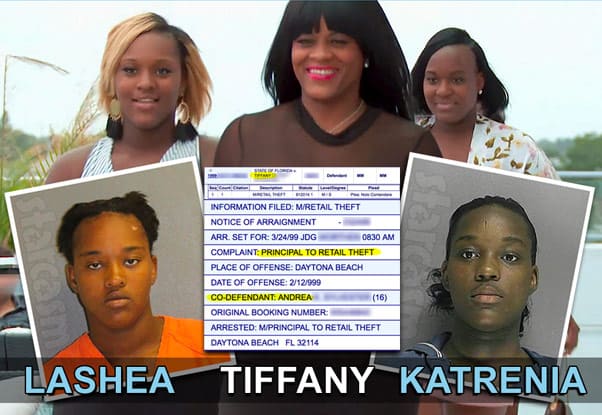 It appears as though Sharp Productions could take inspiration from their 90 Day Fiance spin-off The Family Chantel and fill out the entire cast of a new season of Love After Lockup with The Family Andrea!

During the premiere of the current season of Love After Lockup, Andrea gathered up her sisters (aka sirrstrs) to reveal that she is dating incarcerated Daytona Beach drug kingpin Lamondre. The sisters were aghast at the shocking news as they all lamented that Andrea could do much better.

The gasping kinfolk seem a bit silly when you consider that Andrea has been arrested more time than Lamondre over the years. Their shock is even more ridiculous given that many of Andrea’s sisters have also been arrested! One of them after throwing a chair at Andrea!

Andrea’s much younger sister Lashea (24) was arrested twice last year, once for battery and another time for assault. 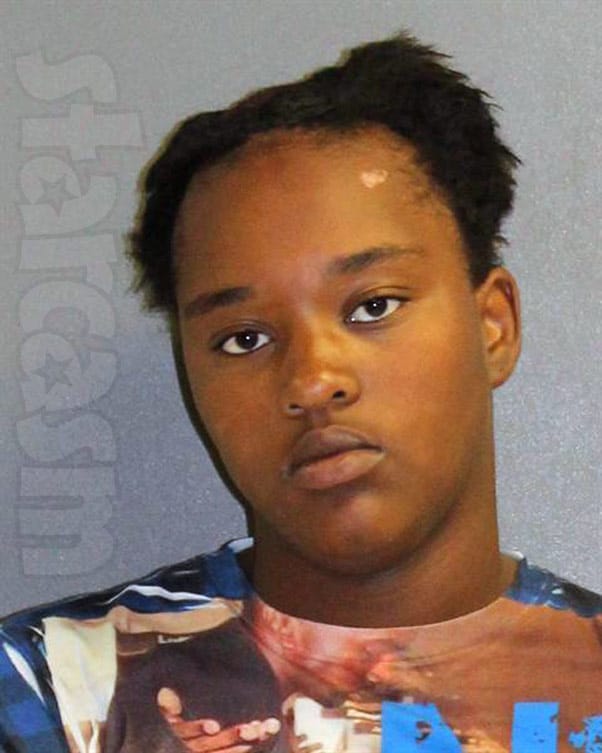 The battery arrest was in August (mug shot photo above), and was all because a Dollar General Store employee was apparently a couple minutes late opening the store. According to the police incident report, the employee arrived at 8:02AM to open up, just two minutes after the store was scheduled to open.

The employee told police that “seconds after opening the store, an unknown young black female entered the store yelling and acting aggressively towards the victim.” The employee instructed the woman to calm down “due to the fact that she was causing a disturbance.”

The employee says the irate customer “became even louder and approached the front register, grabbed two 5-Hour Energy bottles and threw them towards her direction. [She] stated the bottles stuck her on the right side of the neck, but did not cause injury.”

The irate customer walked out of the store, got into a red two-door vehicle, and left.

The employee revealed to police that the store had received a phone call, and the caller ID showed that the caller was Lashea.

The officer on the scene took the employee’s statement and watched the security camera footage, which showed Lashea throwing the bottles at the employee just as described.

Soon after leaving the Dollar General Store, the officer saw a vehicle matching the victim’s description at a nearby Sunoco gas station. The officer made contact with the driver, which, of course, was Lashea.

Lashea admitted “that she was inside the store very upset because [the employee] opened the store late,” but she denied striking the employee in any way. Her denial didn’t carry much weight compared to the video evidence, so she was arrested.

Lashea would end up making a deal which included 6 months probation, eight-hours of anger management, 30 hours of community service, $100 in fines, and a Dollar General Store ban.

If Lashea took the anger management course, she must not have been listening very closely because she was arrested again for assault in October! The incident happened at Lashea and Andrea’s mother Wanda’s house where Lashea was living at the time.

Here’s her mug shot photo from that arrest: 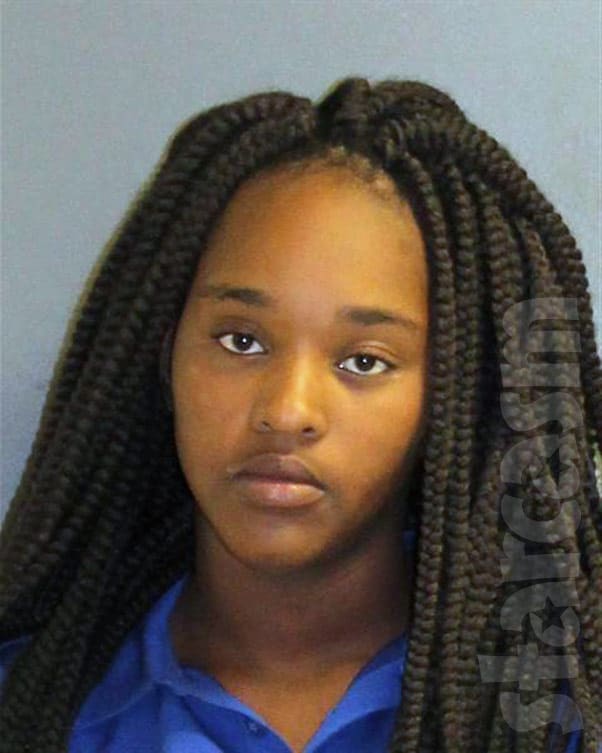 The narrative from the police report is too perfect on its own:

Lashea and her mother Wanda became involved in a verbal altercation when Wanda arrived home to her residence and advised Lashea that she and her two children [redacted] were no longer welcome at her residence and that Wanda wanted them to leave the property. This sparked an argument, which led to Lashea calling 911. During this time, Wanda contacted her other daughters (which consisted of the sister Andrea) to assist with convincing Lashea to leave the property. Wanda advised that Lashea is known to become very violent and wanted her sisters there just in case it happened.

Upon the arrival of Andrea to the residence, Wanda explained to Andrea the situation at hand. Andrea then confronted Lashea in the front yard of the residence about the current issue. It was at this time Lashea became agitated towards Andrea.

Lashea then got out of her chair that she was sitting in, picked the chair up and charged after Andrea in an attempt to hit her with it. Andrea advised that when Lashea got close, she threw the chair at her, which forced Andrea to kick the chair away. After this occurred, other relatives on scene got involved only to break the altercation up.

While on scene speaking with Lashea, Wanda, and Andrea, neither party wanted to complete a sworn statement. Lashea advised that Andrea was the primary aggressor and hit her over the head with the chair. Lashea did not show any signs or injuries that were consistent [with] being struck in the head with a chair, but she insisted on being treated on scene by Daytona Beach Fire Rescue.

Upon questioning Wanda about the incident, she advised that she only [saw] the incident involving Lashea throwing the chair at Andrea, but did not see anything else. There were other subjects on scene during the time of the incident but everyone refused to talk to myself and Officer Jackson while on scene. After speaking with Andrea on scene, she left on foot and refused to return to the scene or to talk with an officer further.

All of the necessary domestic paperwork was completed and turned over to Wanda, who advised she would give it to Andrea upon her return to the scene. A single digital photograph was captured on scene of the chair that was used in the incident and submitted into property and evidence.

The Department of Children and Families was contacted due to Lashea’s children being present during the whole altercation. [She] advised that they would complete a report and follow up with their own investigation. Based on the officer’s investigation while on scene, it is believed that the threat of continued violence was present and would continue to escalate unless the aggressor was placed under arrest.

Given that Lashea was arrested just two months prior for battery and placed on six months probation, it would make sense that she was at risk of doing some real jail time. However, she once again struck a deal that resulted in six months of probation in addition to a 2-day anger management course, 25 hours of community service, no drugs or alcohol (with random urinalysis), and $100 in fines.

Lashea isn’t the only sirrstr who apparently has a temper. Katrenia (now 29) was booked in Volusia County in September of 2009 and charged with battery. The case is a little too old to obtain the documents efficiently, so I don’t have much more information than the charge and the mug shot photo: 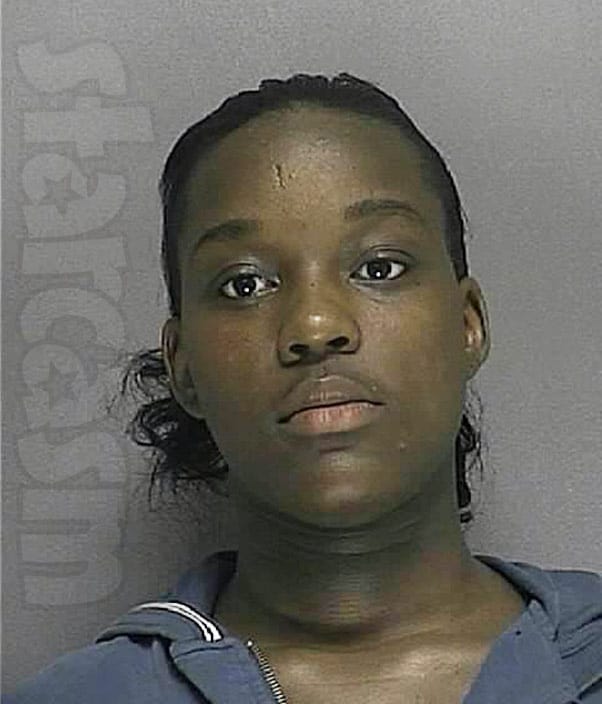 Not to be left out of The Family Andrea crime ring, it appears that older sister Tiffany (now 41) was arrested for retail theft in 1999. Once again, the court records are too old to get the actual documents, but the docket information available online indicates that Tiffany was arrested with Andrea, who was only 16 at the time!

Online records indicate Tiffany eventually entered a plea of nolo contendre to retail theft. There was a $150 fine, but no additional information was available on the sentencing.

If you’re curious about Andrea’s sirrstr and manager Erica, she seems to have lived her life on the right side of the law. In addition to avoiding arrests (as far as I could tell), Erica is also a mom, a college graduate, and a wife of 14 years. Making her relationship even more impressive is that she and her husband were dating for 11 years prior to getting married!

To keep up with the antics of The Family Andrea, be sure to tune in to new episodes of Love After Lockup airing Friday nights at 9/8c on WE tv!