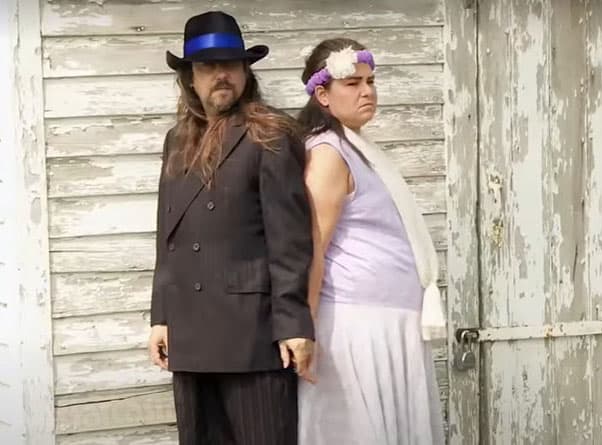 We have a LOT of updates on Love After Lockup and Life After Lockup couple John Miller and Kristianna Roth — including plans to have a baby?!

The numerous updates are all thanks to a nine-minute Instagram live session by Kristianna (included below). The video was shot by Kristianna as she was riding with John on their way to Walmart. While Kristianna was filming, John got a call from a younger person that is somehow related to him — either his daughter/son or a niece/nephew?

Kristianna continues to film as we hear John’s side of the conversation with his relative, with whom he has not spoken with in a while. “We’re blowin’ up a little bit over here. You know, reality TV and all,” John explains. “Yeah, we’re in the process of doing our third season now,” he adds.

We just got offered the opportunity to promote a clothing line. Clothing line, photo shoots, and now the Cameo thing. They actually reached out to me saying there’s a bunch of requests to start doing them, and it’s pretty hard to get on Cameo.

How is your mom? She hasn’t spoken to me in years. It was all over Theresa. Theresa disrespected your mom, and at the time I wasn’t in a good place, you know, and I didn’t really say anything until later. So it kinda just ended things there. But, you know, I think about your mom all the time, you know what I’m saying? And, you know, I miss what we had. And I really want to get that back. And, you know, my life is totally different now. You know, I’m in a good spot. And, you know, well I’m famous now.

After John’s conversation ended, we get additional information from Kristianna as she reacts to comments from those watching her live. In response to someone inquiring about her and John’s future plans, Kristianna drops the baby bomb. “We plan on having a baby, and growing our family, and stuff like that,” she says.

There were photos of Kristianna posted on reddit earlier this year, along with claims that she was pregnant at the time. The person who posted the photos claimed to have spoken with Kristianna and that she confirmed she was expecting. However, the person’s story changed numerous times throughout the comments, so it was difficult to have confidence in anything beyond the fact that there were photos of Kristianna and John shopping together in a store.

The doubtful source and claims didn’t stop the pregnancy reports from spreading online. There were YouTube videos posted and news articles written with titles and headlines like “John & Kristianna Pregnant from Love After Lockup!” and “John & Wife Kristianna Pregnant in Las Vegas.”

So, is there a bun in the oven? “I’m not pregnant as we speak,” Kristianna says in her live video.

Kristianna then seems to contradict John in regards to their guaranteed return to WE tv. “We have no idea if we’re going to be on the show again,” she tells her live viewers. (Perhaps John was just talking big to impress his relative that he hasn’t spoken with in a long time?)

Meanwhile, John and Kristianna continue to try to capitalize on their fame by growing their Bonnie and Clyde brand. In addition to offering Cameo videos, the couple has launched their BCAuthentics etsy shop selling J&K merch. The products available include a coloring book, a face mask, a Bonnie and Clyde t-shirt, and lots of 2024 campaign merchandise?

I haven’t see any mention of an OnlyFans account, but I would assume that John will be starting his soon. 😉

Here’s the full live video, which was captured and re-posted to YouTube: