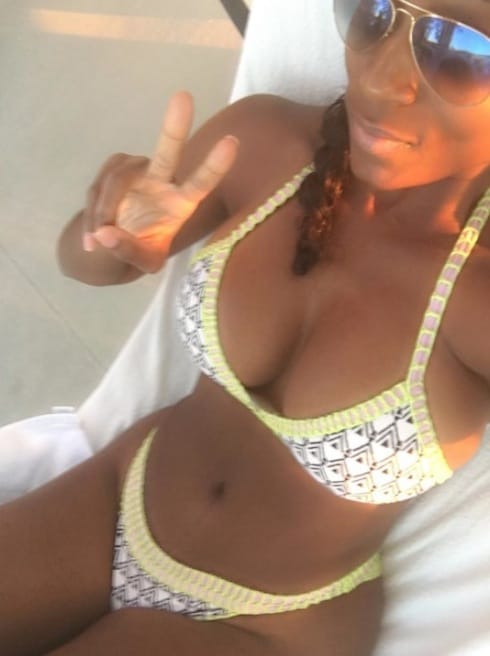 It seems that new Tia Becca pics (not all of which involve the Love & Hip Hop Atlanta star fully clothed) are going to be the newest theme of Season 5! Though some fans know her best for her feud with Scrapp’s girlfriend Tommie–which is only getting more bitter with each new episode–Tia Becca is developing quite a following for her eye-popping work as a model.

It was only a few days ago that Tommie, in a behind-the-scenes clip from VH1, called Tia Becca a “microwaveable pocket p*ssy” (no, really!) and criticized her relationship with Scrapp DeLeon. Since then, Tommie has thrown more shade: VH1 recently published an interview with Tommie, who claims to currently employ the nanny who used to work for Tia Becca. “The same nanny,” said Tommie, “could tell you about Tiarra’s lying a$$.” What did she mean? Never fear; Tommie got more specific:

Tiarra wouldn’t even get up [out of bed]. Got mad at [her nanny] for taking the kids to Target. You know, it’s Target. Target got some cute a$$ sh!t for little girls. They wanted hair bows and that sh!t to do their hair. So the nanny brings them back, looking cute. So, she says “my kids don’t wear Target.” But b!tch, that kid is wearing this young a$$ Polo that they can’t even fit in. That’s what pisses me off in the scene. It’s like, b!tch, you’re doing all of this bragging and boasting about who you work for, how you do all this work. But what are you buying? Bags and shoes, b!tch? Take care of your f*cking kids! As I said before, my problem ain’t with her. It is with Scrapp, but at the same time a b!tch can’t sit in front of me and act like you that and you ain’t.

There is definitely no love lost between these two. But Tia Becca, to her credit, has yet to clap back hard on social media–instead, she’s been developing her brand with a series of increasingly provocative modeling work. We recently wrote about the family photo she shared on Instagram, which was somewhat controversial with fans who didn’t think the reality star’s children should have been included. Most of the Tia Becca pics don’t feature her children at all; nonetheless, the mini-controversy helped push Tiarra’s followers into the six-digit range. The shots have been a fixture for weeks, and show no signs of slowing:

"To be beautiful means to accept yourself. You don't have to be accepted by others. You need to accept yourself." Who don't like me is none of my business… Fuck them! ❤️ Good V I B E S ONLY ? @krishphotos on the photo. With his perfect shooting ass.

For more of Tia Becca, tune in to new episodes of Love and Hip Hop Atlanta Monday nights at 8 PM on VH1.