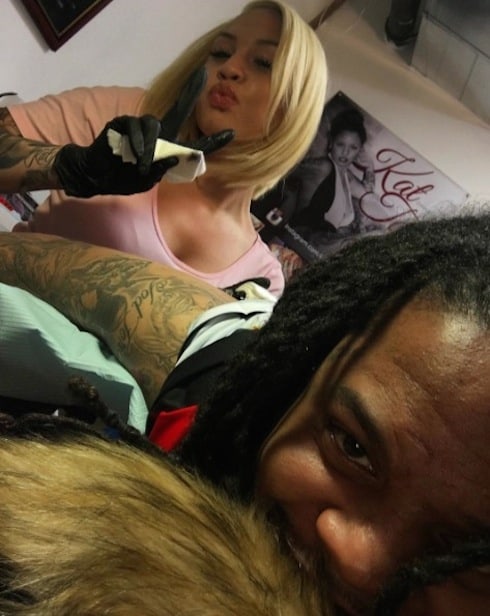 Black Ink Crew Chicago Season 2 is officially happening–and Kat Jackson has even more details about what to expect. For the second time this week, the show’s breakout star gave an interview teasing information about the new season; only, this time, Kat immediately turned around and dropped an Instagram post suggesting we can find her modeling lingerie in the near future!

Kat revealed that Black Ink Crew Chicago Season 2 is a go just a few days ago, while speaking to Rolling Out about life as a woman in a male-dominated industry. While she didn’t know when new episodes were expected to air, it’s been generally believed that VH1 will start showing Season 2 toward the end of the year, just as it did with Season 1. Now, in an interview with Millionaire Match, Kat gets even more specific about what we should expect to see.

Season 2 should “show her brand growing,” according to the publication, and the implication is that we might get to see even more celebrities on the show: A$AP Ferg and the cast of Empire both top Kat’s wish list. Likewise Nicki Minaj: “I don’t know if Nicki Minaj wants any tattoos,” said Kat, “but I love her. She’s one of my biggest role models.”

Drama-wise, fans should expect a lot more. “I can’t really say too much about that,” Kat responded, when asked if her relationships with the rest of the cast are all good. “It’s a roller coaster for everybody.” One other thing she could guarantee? In Millionaire Match‘s own words, “a lot more cool tattoos, conflict, separation and some big named clients coming into 9Mag.” As Kat herself put it, “You will be surprised.”

And speaking of surprised, here’s the aforementioned Kat Jackson lingerie update, which she casually dropped over social media:

Sneak peek of my sexy shoot today! Can’t give too many details but just wait on it! Follow my snap for more BTS footage: KatTatGirl #VictoriaSecretHereICome #Meow #KatTat

It looks like fans of the show should stay tuned for more information from VH1 about when to expect Black Ink Crew Chicago Season 2, and fans of Kat should keep their eyes glued to her Instagram page!