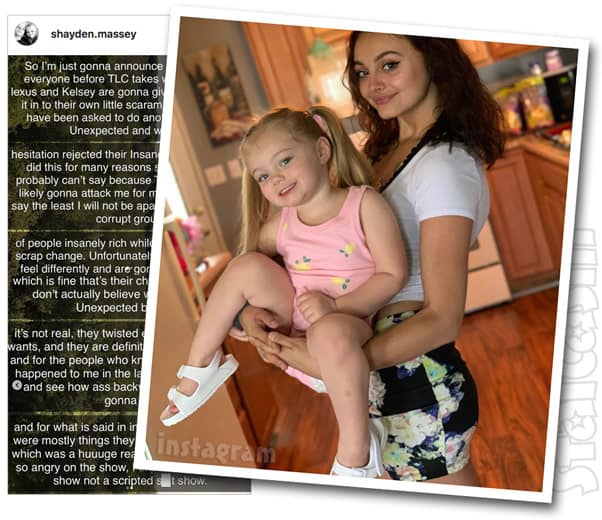 Lexus will reportedly be joined by her daughter Scarlett and mother Kelsey Scheller, but Shayden will not be with them. In Shayden’s announcement on Instagram, he reveals that he declined TLC’s “insanely low offer” to come back. “I will not be apart [sic] of making a fake corrupt group of people insanely rich while they give us their scrap change,” he explains. “Unfortunately, Lexus and Kelsey feel differently and are gonna do the season,” he adds.

Shayden also claims that the show is heavily scripted with a lot of what the couples say during their interviews being written up beforehand. Here is his full statement:

So I’m just gonna announce something for everyone before TLC takes whatever story Lexus and Kelsey are gonna give them and twist it in to their own little scarambled f**k ball. I have been asked to do another season of Unexpected and without hesitation rejected their Insanely low offer, and I did this for many reasons some of which I probably can’t say because TLC already most likely gonna attack me for making this, but to say the least I will not be apart of making a fake corrupt group of people insanely rich while they give us their scrap change.

Unfortunately Lexus and Kelsey feel differently and are gonna do the season. Which is fine that’s their choice, but I hope y’all don’t actually believe what you see on Unexpected because it’s not real, they twisted everything to fit their wants, and they are definitely gonna do it again. And for the people who know what has actually happened to me in the last 6 months watch it and see how ass backwards everything is gonna be.

And for what is said in interviews on the show were mostly things they write up for us to say, which was a huuuge reason why I was always so angry on the show, I expected a reality t.v show not a scripted sh*t show.

Shayden elaborated a bit more in the comments section as he likened his role on the show to being an actor:

COMMENT: When I watched of course you had your bad moments any person who says they didn’t when they are our age is lying but I could tell one thing. You wanted to try and be the best father you could be. I can’t remember if you had an example but whether you did or not you’re doing the best with what you got. It’s hard right now because you’re in the spot light and everyone has an opinion on your parenting but know that the one that it matters most too will be saying “thank you dad for not leaving” one day.

SHAYDEN: Yes I did have good role models and they also helped me figure out how I’m gonna raise my child with where I feel they missed a few things, I feel I know what would have made me listen and it definitely wasn’t the approach that was givin to me, but I don’t regret it because I love who I am, I’m confident in my ability to raise my daughters to be well mannered and respectful young women

COMMENT: Then you must be as fake as the show to pull it off this whole time, so you’re saying if they would’ve offered you more you would’ve continued to read lines 😂😂💀

COMMENT: On the episodes you looked really uncomfortable and like you did not what to be there if we are really fans of i we should have see it comeing🤩

SHAYDEN: I hated being their [sic]

COMMENT: Most reality tv shows are scripted anyway. A lot of Jersey Shore was. Anyone with half a brain cell will know not to believe everything that’s on there. Didn’t they make Ashlie or someone look suuuper sh*tty when that wasn’t actually what was happening? Idk I refused to watch the show cuz I heard so much bullsh*t. Love and support you dude

SHAYDEN: Yah they did, every moment, every event was staged to fit their needs

HAILEY 2: AMEN! Finally! That show is FAKE ASF! They tell you what to say. Glad someone else finally admits it dude.

SHAYDEN: For those who are confused about how it’s fake, when I started filming the second season you know the one that has Lexus like cheating on me n sh*t well all of that stuff happened almost an entire year before they even asked us to be on the second season, we had to pretend like it just happened, and since we don’t remember everything word by word they would come up with sh*t for us to say, some good stuff but most bad, would ask me if I was able to make myself cry on tv, and not to mention the fact that the babies were the real stars of the show and they got paid less than a 40 hour check with minimum wage, and they call it a gift as if the babies aren’t entitled to it, its not just Unexpected that is fake it’s the entire TLC network.

There was also a commenter who says she was being considered for a spot on Unexpected Season 4, but she too declined:

COMMENT: Curious to know how much do they even pay you?

COMMENT: When I was being considered for the show for this upcoming season (I backed out due to becoming uncomfortable with the thought of everyone knowing all my personal business) but it’s $425 dollars for the teen mom and $425 for the teen dad then the grandma’s (teen moms and teen dads moms) get paid $300 and the grandpas (teen moms and teen dads dads) get paid $200 they said if you return it’s a lot more but you have to negotiate in order to get it…that’s per episode they’re on by the way.

#Unexpected Shayden says he and Lexus have broken up after she cheated on him with his best friend while Shayden was in jail! 😳 Get all the details, including what the split means in regards to custody of their daughter Scarlett. #LoveDuringLockup https://t.co/1DOR7dNXBC

Neither Lexus nor her mom Kelsey have commented on their potential return, which I assume is what producers want.

UPDATE – In mid-June, Laura Barron posted that she was filming again too. However, there are rumors online that the returning moms are just filming updates. Right after Laura’s post, Chloe Mendoza and Emiley Noack shared photos of Zoom video conference call featuring themselves, Lexus Scheller, and Lilly Bennett. That does seem to suggest that they are filming some sort of catch-up special. Here are the photos: 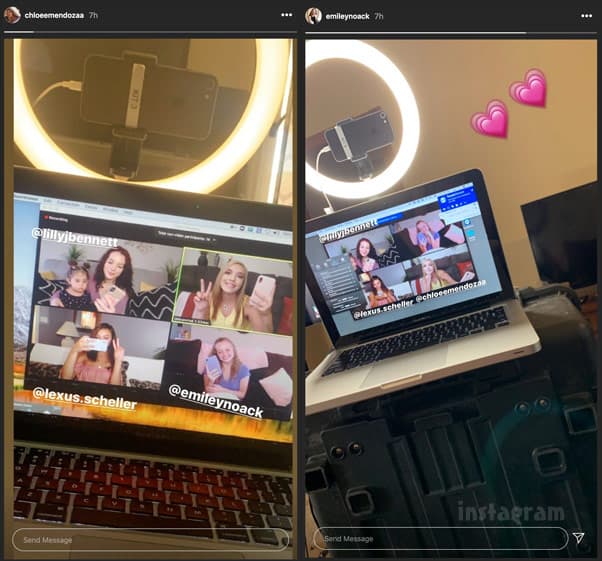 UPDATE – Chloe clarified on our Instagram post about Laura Barron filming again that all of the former cast members were only filming a catch-up special. “Omg I’ll just clear this up,” Chloe wrote. “The only people returning for season 4 are Tyra and Hailey one. Lexus, Laura, Emiley, Lilly and myself filmed a where are they now thing it’s only 1 episode.” I gotta admit that I’m kinda bummed.

I previously suggested that producers might consider doing a spin-off series with the four former moms from previous seasons. I suppose that concept is still a possibility, but we haven’t heard anything from any of the other former moms about returning, whether for a spin-off or Unexpected Season 4. The four moms who have been gone for at least one season include Lexus, Emiley Noack, Lilly Bennett, and Laura Barron — the latter two of which are currently pregnant.

#Unexpected Shayden Massey is going to be a dad again! No, Lexus Scheller isn't pregnant. And neither is Shayden's new girlfriend. It's kinda complicated, but we've pieced it all together for you. (Plus, new details on Shayden's numerous legal issues!) https://t.co/aSenS4XCfV

Getting back to Shayden’s frustrated comments…

I know a lot of reality show viewers are going to scoff at Shayden wanting more money to be on the show, but he is EXACTLY right. It is our understanding that first-year moms on the show are paid well under $1,000 per episode, just as the commenter above suggested. They get a small increase if they come back for another season, but the amount remains below $1,000 per episode. McKayla Adkins was the only mom to star in three seasons, and we are told that she did finally manage to bust through the $1,000 per episode ceiling, but not by much.

As I’ve iterated several times before, the original moms AND dads on Teen Mom OG and Teen Mom 2 reportedly make $300,000 per season each. Unexpected is currently getting lots more viewers than either of the Teen Mom shows. I know it may frustrate a lot of people who would insist that someone shouldn’t get paid for getting pregnant as a teen and then just letting someone film them living their lives, but sharing their stories is making A LOT of people A LOT of money. They absolutely deserve to be compensated for that.

Of course, Unexpected is a bit different than the Teen Mom shows in that they have demonstrated that they are willing to turn over the cast every year. That gives them a huge bargaining advantage. Even so, the current cast should certainly be working with each other to present a united front in their contract negotiations. The same applies for shows like those in the 90 Day Fiance franchise. How little those cast members are getting paid versus how much revenue the shows are bringing in is just shameful.