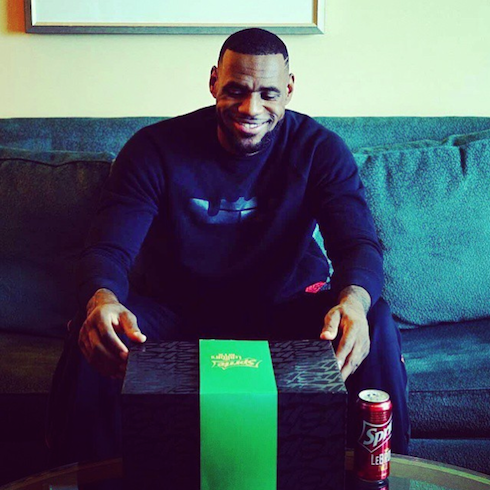 LeBron James is the most well-known and highly visible player in the NBA. Has been for years. And he’s in the middle of his fifth straight trip to the NBA Finals. Last night was Game Four of the Finals. LeBron James’ Cleveland Cavaliers were up 2-1 over the Warriors of Golden State. The game was in Cleveland. If Cleveland won at home and went up 3-1, that would basically be that. Only eight teams in the history of the NBA have come back from 3-1 deficits. None of those teams did so in the Finals.

The overall point here is that there was a lot of attention paid to this game, a lot of that attention came in the form of cameras, and a lot of those cameras were focused on LeBron James. Which made what happened right before the game all the funnier:

In case you missed it: Yes, that was LeBron James making a quick change to the tip opening right before the opening tip. The producer of the show wisely (and amusingly) chose to cut to a shot of commentators Jeff Van Gundy, Mark Jackson, and Mike Breen, lest LeBron need to make another reacharound. And the play-by-play crew, to their professional credit, did not miss a beat. But, this is the internet, so now we have footage of LeBron James’ most prominent before-the-cameras-slash-behind-the-scenes moment. There’s probably a silly joke to be made about packages being delivered via The Mailman, but LeBron doesn’t play much power forward anymore.

The Cavaliers of Cleveland, for a myriad of reasons, went on to lose last night’s game in a blowout. LeBron had an off night, scoring 20 points on 22 shots. Game Five is Sunday.

How does LeBron James apologize to his neighbors? With cupcakes, of course

Florida man arrested after ordering pizza to his own illegal cockfight