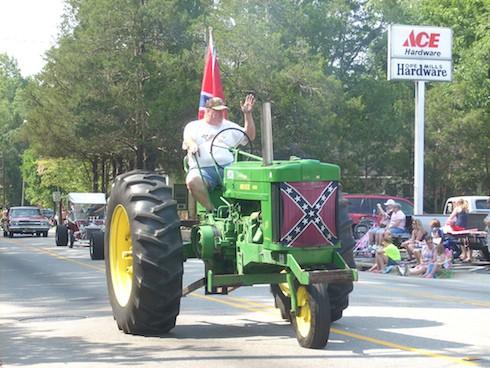 The Confederate flag parade wound through Dalton GA over the weekend, and featured dozens of trucks and cars flying the Civil War-era emblem. A man at a local gas station started filming the event, and offered commentary on what he saw. “This is some bullsh*t,” the filmer said. “Look at this sh*t. They got the roads blocked off.”

The man then panned to a shot of a local police car that was indeed parked across a perpendicular street in order to impede the flow of traffic.

However, moments later, the man noted the speed of some of the cars, judged it against the upcoming red light, and concluded, “They about to wreck.”

According to UPI, the parade had been scheduled to end in the nearby Wal-Mart parking lot.

The Confederate flag parade was organized in response to the recent wave of anti-Confederate flag sentiment sweeping the country, in the wake of the Charleston church massacre in South Carolina. Major retailers, including Wal-Mart, Sears, Amazon, and eBay, have removed as much Confederate flag merchandise from their stock as they can find. Some flag manufacturers have gone so far as to stop making the emblem.

Vermont man racks up three DUIs in one night

PHOTOS The biggest Bloody Mary in the world is intimidating