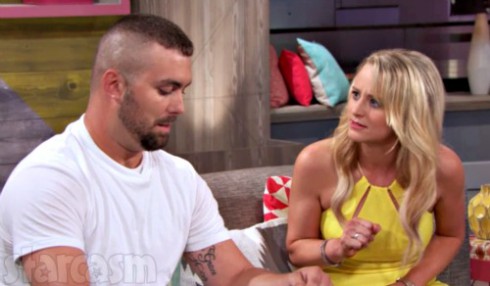 Leah Messer’s new interview is proving to be one of her most revealing, wide-reaching ever. Not only did Leah confirm she lost primary custody of her twin daughters to Corey Simms, she also copped to cheating with Corey when they were both remarried and to using painkillers. And, as if it wasn’t already clear from the excerpts released yesterday, new quotes from Leah’s chat with Us Weekly prove she has a bone to pick with her first ex-husband.

“I think child support has a lot to do with [his motivations],” Leah said of why she thinks Corey fought her so hard for primary custody. Leah explained that Corey used to pay her $800 per month for caring for their daughters through the school week. But, now that she only has the girls on the weekends, he will pay her much less.

Throughout their custody battle, both sides have claimed they only have the girls’ best interests at heart. In his argument, which swayed the judge, Corey claimed Leah was often late in dropping their daughters off at school, and, on the last season of Teen Mom 2, he accused Leah of letting the girls fend for themselves in the morning while she slept late. In her new interview, Leah said those accusations aren’t only wrong — but that the girls are worse off when they are with Corey. “Aleeah’s talked about running away,” Leah said, adding the twins are “miserable” when they are at Corey and Miranda’s house.