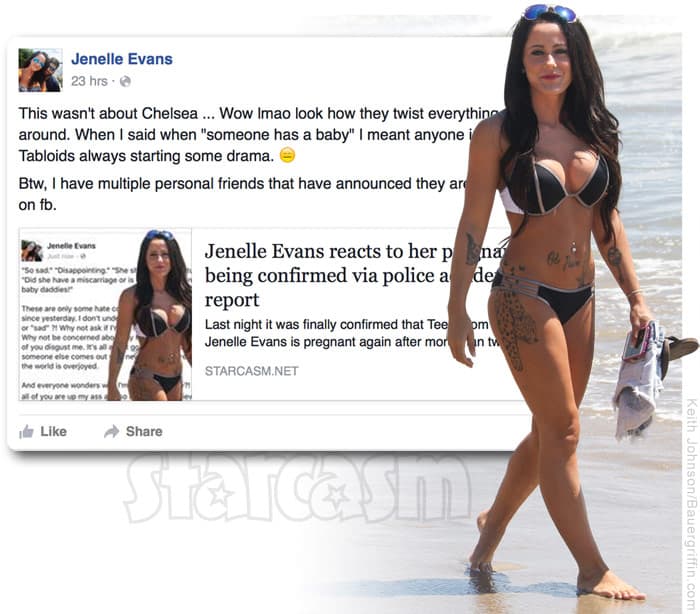 The fallout continues after confirmation of Teen Mom 2 star Jenelle Evans’ pregnancy leaked online Friday via a police accident report. We’ve put together a bullet point recap of everything that has happened so far, which includes Jenelle deleting her Twitter account, denying that her frustrated comment about “the world” being “overjoyed” when “someone else comes out with news they are pregnant” was about her co-star Chelsea Houska, and some very concerning remarks that have many worried about her well being.

• Jenelle Evans’ pregnancy is confirmed by a police accident report from July 6 after David Eason rear ended another driver. Jenelle was in the passenger seat, and the police report stated that she told police officers she was at least ten weeks pregnant before she was taken by EMTs to a local hospital. As we pointed out in our previous post, a nurse pointed out that the “at least ten weeks” was likely just a minimum threshold to determine which part of the hospital received Jenelle because being more than 10-12 weeks pregnant usually means a patient is taken to labor and delivery.

“So sad.” “Disappointing.” “She should have her tubes tied.” “Did she have a miscarriage or is she still pregnant?!” “3 baby daddies!”

These are only some hate comments I have been receiving since yesterday. I don’t understand what is “disappointing” or “sad” ?! Why not ask if I’m ok from the car accident?! Why not be concerned about my health?! I want privacy. All of you disgust me. It’s all about gossip these days… Funny someone else comes out with news they are pregnant and the world is overjoyed.

And everyone wonders why I’m so private lately?! Because all of you are up my ass and so nosey it’s unbelievable. ?? ‪#‎F**kOff‬

• We shared our story about Jenelle’s statement and made the assumption that Jenelle was referring to her Teen Mom 2 co-star Chelsea Houska (who announced she is currently pregnant earlier in the week) when she wrote “Funny someone else comes out with news they are pregnant and the world is overjoyed.”

• Jenelle responded to our story on Twitter and Facebook insisting that she wasn’t referring to Chelsea, adding that she has “5 friends that just recently announced they are pregnant on fb” in her tweet:

This wasn’t about Chelsea … Wow lmao look how they twist everything around. When I said when “someone has a baby” I meant anyone in general. Tabloids always starting some drama. ?

Btw, I have multiple personal friends that have announced they are pregnant on fb.

[To Jenelle’s credit, she never did mention Chelsea by name. To our credit, it seemed like a logical connection.]

• Jenelle’s Facebook page shares a link to Radar Online’s story about her reaction statement, which follows up her “overjoyed” comment by pointing out Chelsea had just announced she was pregnant.

• Jenelle expresses her anger at Teen Mom 2 co-star Kail Lowry on Twitter — it’s not clear what Kail did exactly: 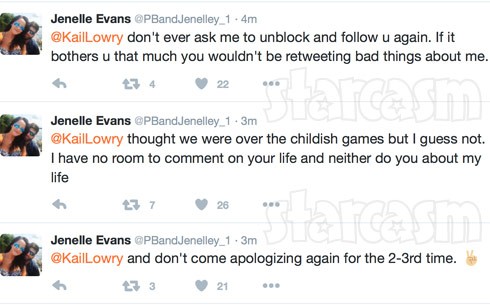 • Jenelle responds to a tweet allegedly containing messages from Jenelle’s brother Colin and a friend of Jenelle’s sister Ashleigh in which it suggests Jenelle is five months along in her pregnancy:

@PBandJenelley_1 looks like your brother and your sister like talking to your "haters". They say you're 5mo pregnant pic.twitter.com/TGaPofpcK0

I’ll always be here for you, please stop keeping from your life. We’ve been through everything. I care so much about you and I just want to make sure you’re okay and I want to know how you’re doing. I know u have David to talk too but everyone needs a girlfriend and idk my feelings are hurt that u never let me know how you’re doing.

• The Twitter account @DavidEasonPR (which does appear to be officially connected to David Eason) tweets another concerning message:

As of the time of this post, Jenelle’s Facebook and Instagram accounts are still active — but that may have been more of a business decision than a personal one because it is through those two platforms that Jenelle makes a lot of money via links and advertisements. I don’t believe her Twitter account generates as much revenue.

I have been covering Jenelle since before her episode of 16 & Pregnant even aired, and I wanted to say that I’m genuinely concerned for her at this point. I’m not sure what the term is for her temperament, but she seems to exist at the extremes almost all the time. I believe deleting her Twitter account was a wise move, and I hope that she is able to step away from her other social media accounts and let someone else handle them for all the business stuff.

We will continue to keep you updated.