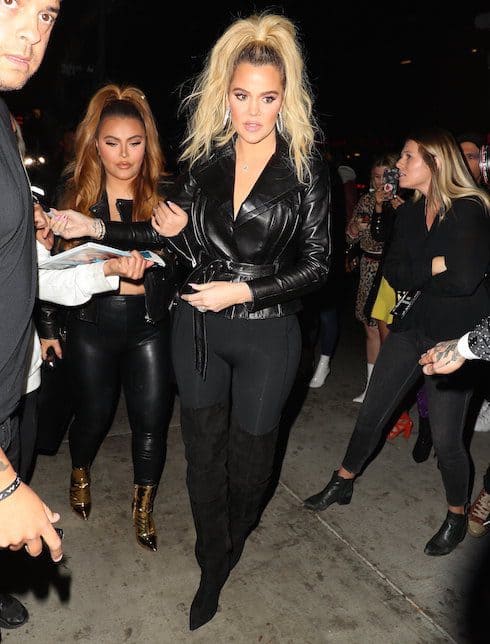 Is Khloe Kardashian pregnant again? Just a few hours after our humble article on how we should all be prepared for a pregnancy announcement from Khloe any day now, a new report from People alleged the exact same thing — and with anonymous insider quotes to boot!

Before we get to that, it’s important to point out that Kris Jenner has been telegraphing her passes on this front for awhile now. Kim and Kanye’s pregnancy announcement signaled that the family will again juggle multiple simultaneous pregnancies this year, and Khloe and Kylie Jenner have been the two most likely candidates for weeks. In fact, if it turned out one or both of them have been pregnant ever since it emerged that Kris had been kinda-sorta trying to convince them, we wouldn’t be the least bit surprised.

Plus, numerous other outlets have been reporting on Khloe’s alleged forthcoming second pregnancy since not long after True’s birth. So we’re hardly claiming to have reinvented the wheel here.

Still, it was nice to see the People article, featuring many of the same quotes in the same order as the ones in our article, appear mere hours later. And I don’t even mean that sarcastically. Plenty of sites get stories from each other; the big ones just have better access to those handy-dandy anonymous insiders.

Speaking of which, here’s what Kardashian-friendly People had to say about Khloe and Tristan’s eventual second child together:

–“Having True has changed Khloé’s life.”
-“Though you might think having a new baby amid all this drama with Tristan would make things even harder for her, it was actually the opposite. True gave her something incredible to focus her love and energy on, and it helped her and Tristan stay bonded no matter what.”
-“[Khloé] would love another baby and to give True a sibling. She always wanted to be a mom and it wouldn’t be surprising if she got pregnant again.”

Just like with the tweet from Khloe that set off this particular chain of gossip, the insider quotes don’t actually say anything we didn’t already know or assume. Of course having a baby changed Khloe’s life; of course a baby is “something incredible to focus on”; it wouldn’t be surprising in the least, for both personal and professional reasons, for Khloe to be pregnant again.

The real takeaway here is the continued insistence that having True helped Khloe and Tristan bond. This idea has popped up several times since her birth. I’m sure some relationships are indeed saved by having a baby — but isn’t “The baby saved our relationship” also the super clichéd thing people say to try and convince themselves that they can work things out? Not that I’m hoping Khloe and Tristan have a hugely messy split; I guess I’m just saying that you often don’t know what you’re saying or even thinking for the first few months after your first child arrives. Making major decisions while suffering from post-baby delirium is just as bad as making them while in the middle of making the baby itself.

With that said, we already know that Khloe and Tristan seem to bond over traumatic events. So having more children might be just the thing for them.

Tara Reid loses tooth, glues it back and continues to party