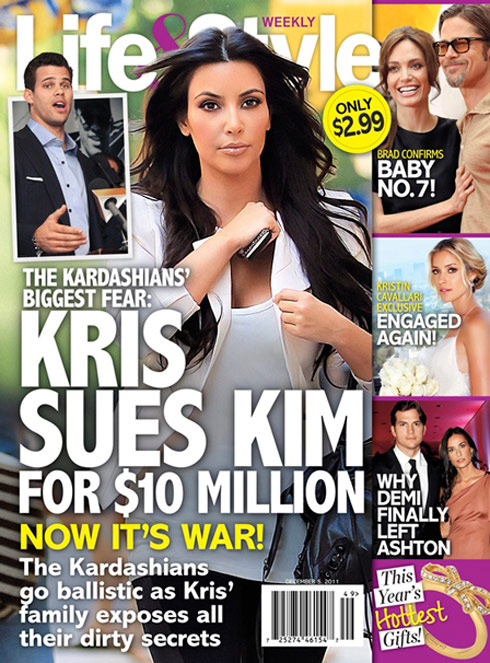 In the new issue of Life & Style the cover story headline reads “The Kardashians’ Biggest Fear: KRIS SUES KIM FOR $10 MILLION – Now It’s War! The Kardashians go ballistic as Kris family exposes all their dirty secrets.” In the article a source tells the magazine that Kris has met with a legal team and is planning on suing Kim in an attempt to prevent unflattering footage of him being aired on the upcoming season of Kourtney & Kim Take New York.

“Kris has a legal team investigating his options,” the insider tells the new issue of Life & Style. “He’s claiming his role on Kourtney & Kim Take New York is bigger than he was told, and that’s why he wants more money. But Kris is also suing because he’s really worried about how badly he’s going to be portrayed on the series.”

In particular, Kris and his family are worried about a specific scene in which he appears to bully Kim’s close friend Jonathan Cheban. “Midway through the season, Kris starts bullying Kim’s best friend, Jonathan Cheban, about his sexuality,” one of Kim’s pals tells L&S. “Jonathan isn’t gay, but Kris accuses him of being gay and criticizes him for it in a really homophobic way. Jonathan is really upset.”

As is Kim. “Kris used the word ‘gay’ as an insult, to try and hurt Jonathan,” an insider at the E! network tells the tabloid. “He’s the lowest of the low bullying someone like this.” 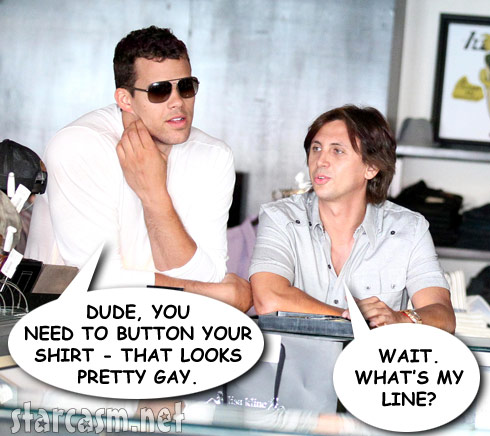 ^ Kris Humphries and Jonathan Cheban from happier days, namely back on May 19, 2011. (WENN.com)

The potential lawsuit won’t be in time to stop the premiere of Kourtney & Kim Take New York on November 27, but Kris and his lawyer, lawyer Lee Hutton III, will be trying to prevent some of the more inflammatory moments from airing later in the season.

Meanwhile, Kris’ family is “revealing” that much of the show was scripted, including some scenes in which Cheban’s sexuality is discussed. Kris’ family insist that he is anything but homophobic. “Little did Kris know that he was being set up,” his father, William Humphries, tells Life & Style exclusively. “Kris got used –100 percent used.”

I don’t know what to make of all this. The Kardashian fame factory is so diabolical that, aside from their show, I can never tell what’s scripted and what isn’t! Did they plan the 72-day marriage all along? Did they plan this Kris Humphries controversy to drive up ratings? Is Kris in on it? It’s all so frustrating to me because no matter how much talk there is about boycotting the Kardashians, people will still be tuned in to KaKtNY to watch the marriage dissolve. Bleh. I’m usually all about the entertaining drama, fabricated or not, but you can count me out on this one.

That being said, c’mon Kris! You’re gonna bully Jonathan Cheban and call him “gay” in a derogatory manner while reality show cameras are rolling and then file a lawsuit later because they might actually use the footage? And you also claim the scene was scripted in the first place?!? I don’t understand.

Anyways, pick up the latest issue of Life & Style for all the juicy deets, including “EXPLOSIVE FOOTAGE OF KRIS BULLYING KIM’S BEST FRIEND, JONATHAN CHEBAN,THAT HE DOESN’T WANT YOU TO SEE.” (Video footage in a magazine? I might have to check that out!)

Kanye confessed his love to Kim Kardashian: A timeline of their romance