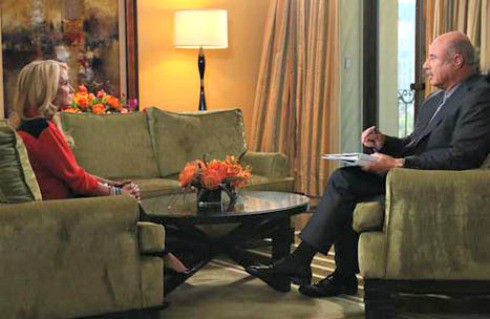 Less than one week after she was arrested in Beverly Hills for the misdemeanors of trespassing, resisting arrest, battery on a police officer and being drunk in public, Real Housewives of Beverly Hills‘ Kim Richards sat down with Dr. Phil to discuss what led up to the meltdown.

“I was angry and frightened and I was scared,” Kim told Dr. Phil, according to an early transcript obtained by E! News. “I knew what I had done. The whole night is my fault. None of this would have happened if I didn’t drink.”

Kim was arrested in the early morning hours of April 16 at the Beverly Hills Hotel. The police report says officers had to “drag” her out of a bathroom and she kicked one at the police station. She was released hours later after sobering up and posting $20,000 bond.

The former child star admitted to having a problem with alcohol before entering rehabilitation in 2011. She maintained on the last season that she was sober. Radar Online reports producers are torn on how to deal with the situation because she’s “so amazing for ratings,” but has proven to be a potential liability.

“They also think that keeping her on the air is not conducive to her well-being,” a source said. “The higher-ups do not want to be held responsible if something tragic happens to her.”