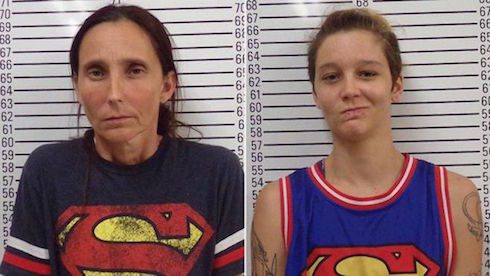 Oklahoman Patricia Ann Spann, best known as the woman who married her daughter in March 2016, has been sentenced to two years in prison on a charge of felony incest. Bizarrely, the charge comes a decade after Patricia also married her then 18-year-old son.

According to NewsOK.com, the 45-year-old Oklahoma native married her daughter, 26-year-old Misty Velvet Dawn Spann, in a March 2016 ceremony. Patricia apparently told a Department of Human Services worker that she’d lost custody of Misty “years ago,” and that she and Misty “hit it off” after they were reunited in 2014. (Per a court affidavit, it was the DHS worker who discovered the incestuous marriage, while conducting a child welfare investigation.)

And Patricia seemed to want a legal veneer over her marriage to her daughter: Misty, who requested an annulment last autumn, said that her mother “consulted with three separate attorneys who advised there would be no problems with the marriage.”

Indeed, Patricia told the same DHS worker that she had “looked into” the possible legal ramifications of marrying her own daughter. Her conclusion, she explained, was that the two would be fine “because [Patricia’s] name was no longer listed on Misty’s birth certificate.”

Patricia and Misty were charged with felony incest in September 2016, six months after their marriage. This week, Patricia pleaded guilty. She received a sentence of two years in prison; eight years on probation; a fine of $1,500; a $300 payment to the “state victims’ compensation fund”; and a total of $991 in legal fees.

As for Patricia’s other now-infamous marriage? Police found out about the woman who married her daughter’s marriage to her son while investigating the former. It seems Patricia married her teenaged son back in 2008 — in Lawton OK, the same town where she would later marry her adult daughter.

But Patricia’s son-husband soon requested an annulment, which a judge granted in 2010. It’s not clear why that marriage resulted in no criminal charges.