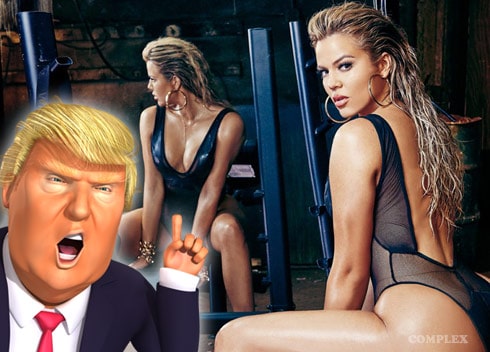 Khloe Kardashian has responded to allegations that Donald Trump insulted her during her appearance on The Celebrity Apprentice.

The Huffington Post reported last week that the Republican presidential nominee disparaged Khloe in off camera comments, calling the famous Kardashian sister, among other things, a “fat piglet.”

A show editor told HuffPo that Trump asked, “What is this? We can’t even get the hot one?” – in reference to Kim Kardashian. “He basically wanted to just get rid of her. He called her a ‘piglet,'” the editor stated. Another source backed up this story claiming that Trump said, “Why don’t we fire Khloe? She is a fat piglet. Why did we get the ugly Kardashian?”

When the Los Angeles Times caught up with Khloe Monday she had no problem addressing the topic:

“I didn’t think he was saying those things about me… But he says those comments about a lot of women — really derogatory things. Someone who is that simplistic to judge things off of surface is not someone I want running my country. It’s not cool or appropriate for any person, male or female, to judge someone else by their looks… I find it really cruel. It’s wild… I’m a tough cookie, so something that he said — that’s not gonna bother me. Ninety percent of the time, criticism doesn’t bother me. I’m not sure why. I think I’m just in my own world. But I believe that’s why those incidents happen to me, because I can take it. If that’s what it takes to get even just this little group of people to realize how shady and bad and negative that one person is, I can take it.”

When Khloe spoke with Extra about being lumped in with all the alleged bad things Trump has said about women, she replied, “For Trump or any human being to judge someone off looks alone… I think that’s really immature and cruel.”