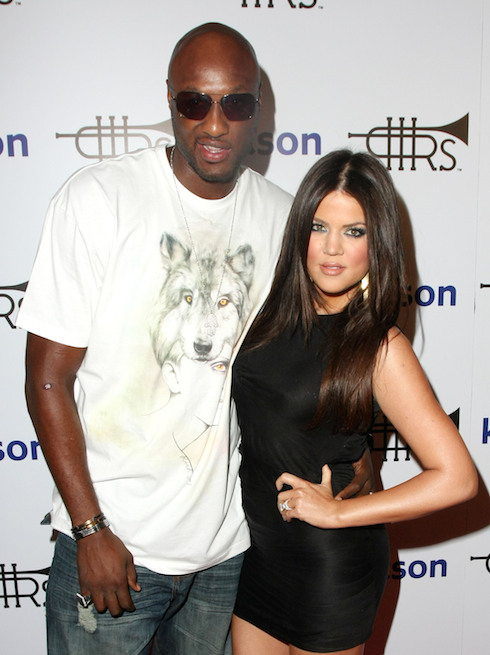 According to the latest Khloe Kardashian and Lamar Odom update, the pair might have called off their divorce just in time for the husband. A new report suggests that Lamar Odom is still on the hook for the bill at the brothel where he was found overdosing on drugs two weeks ago–and that the bill is not cheap. Lamar’s wife Khloe Kardashian, with whom he very recently reconciled, might be on the hook for the entire bill, which tops out at almost $80,000. However, their bond is so strong that Khloe might simply pay the bill without question…and for a very simple reason.

Dennis Hof, owner of the Bunny Ranch–the brothel where Lamar Odom intended to spend “five to ten days”–says that he has not yet been paid for services rendered. According to Hof, Odom determined that he would pay approximately $75,000 for the services of two prostitutes for the length of his stay, which had not been fixed at the time that he signed in. Hof claims that he has security camera footage of Odom signing a credit card statement and handing over a copy of his driver’s license for the brothel’s records.

Said Hof: “If I don’t get paid for the entire bill, I’ll sue Khloe: I know she has the money.”

Complicating matters for Hof is the fact that, since the last Khloe Kardashian and Lamar Odom update, the pair have reconciled; and Khloe, who is worried about the “vultures” she claims will try to pick him apart in his weakened condition, has taen over Lamar’s entire estate. What that means for Hof, then, is that Odom has the Kardashian legal machine behind him–and all of the financial resources that that entails.

In Hof’s case, however, it’s believed that Khloe might simply pay the bill and move on from that particular chapter in her life–and in Lamar’s. “Khloe thinks Dennis is the worst kind of scum,” said a source close to the pair, “but, right now, she’s not thinking about him much at all. Sure, there’s a part of her that would love to get in court with him and take him down, but she’s not letting herself go there because she wants to stay as positive as possible.

“Lamar is fighting for his life,” the source continued. [Khloe is] his strength right now. She can’t waste her energy on pond scum—she needs to keep it her strength for Lamar.”