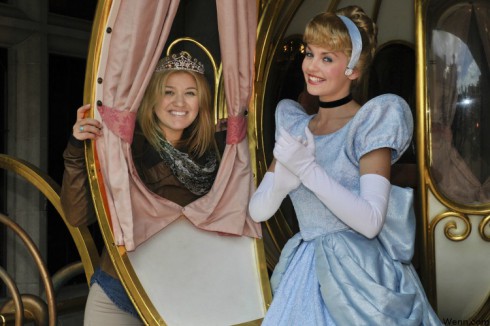 Even though Kelly Clarkson won’t officially become step-mother to Brandon Blackstock’s two kids until she weds the music manager in October, she already feels settled into the role.

“We all live together and everything,” the first American Idol winner told Ryan Seacrest during his radio show. “It’s so different, but it’s perfect. They’re awesome, and I actually really dig the mom thing.”

Kelly, who is currently on what she calls the “Off the Market” tour with Adam Levine, admitted it was an adjustment to go from being single for six years to living with a 12- and 6-year-old. Still, she loves the experience… Even though the affection she shows the kids is more of the “tough love” variety. (Hopefully she got some tips from Cinderella about what not to do!)

“I’m quick to go, ‘I told you not to touch that!'” she revealed. “We all work really well together, but I’m totally my mom. My mom was a hard mom. I’m probably that mom.”

“I’m so over it. It’s so overwhelming,” said Kelly, who got engaged last December. “We’re just doing a lot: touring and the wedding and the Christmas album, so I’m over the wedding part.”

Listen to the complete audio from On Air With Ryan Seacrest.