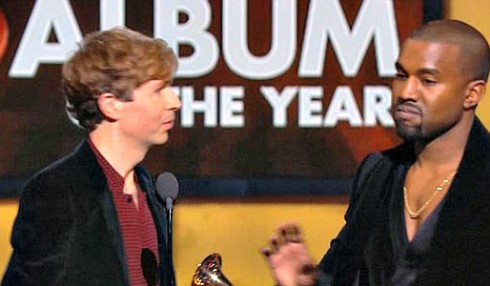 Speaking to Ryan Seacrest today about interrupting Beck at the Grammy Awards, Kanye West did a bit of backpedaling on his comments that Beck should “respect artistry” and give his Best Album award to Beyonce.

“When I said that thing about respect artistry, I think it came off the wrong way, and that was a mis-wording on my part because obviously Beck is one the most respected artists and respects artistry,” Kanye said via E! News. “But I felt that even though the Grammys some times gives awards to people who you wouldn’t think should win in the category, as a respect to artists, we mention the other artist’s name in our speech. And that was the point I was making about it.”

Kanye added he felt like all the eyes in the room were on him and he basically didn’t have a choice but to make a statement.

“You know, I felt like just the whole Grammys, right when that happened, everybody was looking at me and then people started screaming, ‘Kanye! Kanye! Go do it!’ Ok, that didn’t really happen, these were voices in my head,” Kanye explained. “So the voices in my head told me go and then I just walked up like halfway up the stage. You know, what I really wanted to do is just joke around about what had happened before… It was kind of a joke like the Grammys themselves.”

Kanye said he hasn’t paid attention to what others have said about the incident since then, but believes it was well-received in the moment.

“At the Grammys when I did go up onstage and left off, there was a really good vibe about it, and everybody was laughing and smiling,” he said, explaining he had “good intentions.”

He also hopes that Beck understands why he did what he did and said he’s more than open to collaborating some day — just like he’s now doing with his other awards show interrupting victim, Taylor Swift. He revealed, “She wants to get in the studio and we’re definitely going to go in. Any artist with an amazing point of view, perspective, fan base, I’m down to get in the studio and work. I don’t discriminate.”