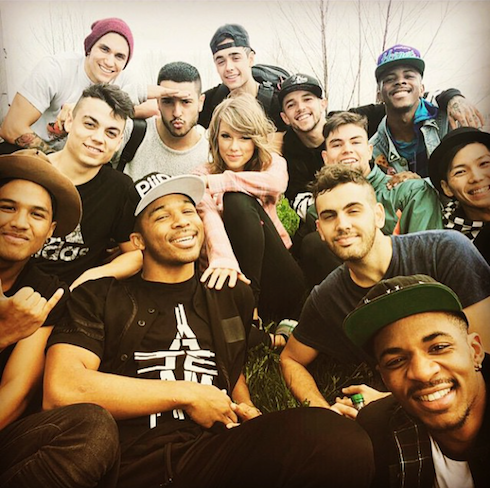 Emily Beazley is a 12-year-old Chicago girl who has battled non-Hodgkin’s lymphoma since 2011, saw her wish come true this week when she received a phone call from her idol, Taylor Swift.

The two talked for about ten minutes while Emily was in the car with her family, headed back home after a chemotherapy session. In fact, Swift had called earlier, while Beazley was in the middle of the session, and father Ed offered to interrupt the treatment so the two could talk. But Swift insisted that Emily finish her treatment for the day, and assured the family that she would call back shortly.

She knew all about me, my favorite color, the street naming….She told me about her tour starting in Tokyo, and she asked what my favorite song was and I told her ‘Shake It Off.’ Then she said, ‘Oh, that’s really cool.’

“The street naming” refers to a section of South Homan Avenue, near Emily’s home, being renamed in her honor a few weeks ago.

Swift was so personable, when Emily mentioned that her eight-year old sister Olivia was also a fan, the pop star immediately began chatting with the younger sibling.

Emily’s mother Nadia said the call made her daughter smile bigger than she has in a long time. “To see her little face all lit up, so genuine, the biggest smile,” Beazley said. “She got out of the car and jumped up and down.”

“I love her music because of the way it makes me feel — happy,” Emily added. “It feels really good right now. I’m really happy right now.”

Emily has tickets to see Swift perform at Chicago’s Soldier Field in July, but the family isn’t sure whether she will be well enough to make the trip. Swift’s representatives offered the Beazley family tickets to a May show in Detroit, which Emily will try to travel for.