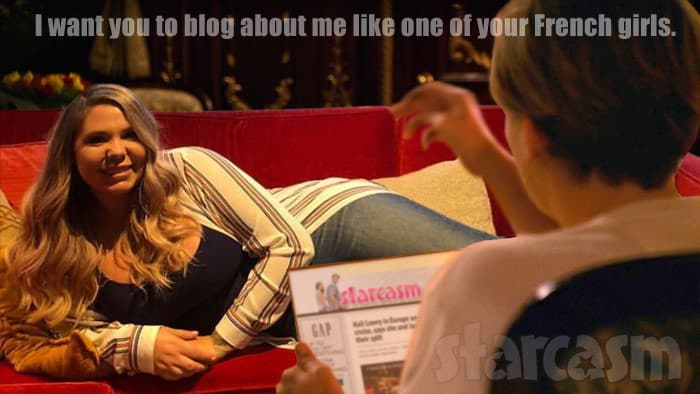 Teen Mom 2 star Kail Lowry is currently on a seven-night Mediterranean cruise, but she’s not about to let a relaxing European vacation prevent her from stirring up more drama back home! As fans of the show are well aware, there’s no such thing as a “clean break” when it comes to Kail and relationships, and that was apparently true for Javi as well because Kail has just admitted the two hooked up after their break up. More about that in a minute — first I wanted to answer the question a lot of folks seem to be asking on social media: Why is Kail in Europe?

Kail actually answered that question herself back in January. “I earned the all expense paid trip FOR TWO through Scentsy to Spain, Italy & France,” she tweeted. “I’m about to cry,” she added.

Kail has been selling scentsy for quite a while, and it appears that she was able to sell enough to earn the highest level slot on the cruise. Or would it be that the people she signed up to sell Scentsy sold enough? Or that those people signed up enough people that sold enough? Anyways…

Here are the cruise deets and even a promo clip for the incentive trip:

There are four levels for this incentive — everyone will have the opportunity to work toward something really amazing.

Level 4: All-expenses-paid incentive trip for Consultant and one guest

After Kail tweeted that she had earned a slot of the cruise, one follower responded by suggesting that perhaps it was Kail’s celebrity status that earned her the trip, not her sales. “You have to wonder if you get to go so scentsy gets the press of your trip,” the tweeter pondered.

Scentsy may not care about press, but Kail certainly does! And she used her quiet time on the flight over and on the cruise to ramp up the press with a string of tweets about hooking up with her ex Javi, her relationship with girlfriend Dom, and her bi-annual announcement that she is cutting toxic people out of her life:

I’m reading so much sh!t about myself on here y’all. I’m about to clear some sh!t up once & for all

Dom & I dating – I wasn’t trying to deny her or a relationship. & we had fun while it lasted but things didn’t work out. I’ve learned a lot over the years and wanted to keep things private & off the show but i don’t think i really handled it properly

2- Javi & i talked about getting back together at one point. Why? I don’t know because we both knew we didn’t want to & it would never work. I regret even having those conversations. I regret filming about it. And hooking up w him as i know people from the reunion leaked that.

That being said, i am wishing him and his new family the best. I have no hard feelings about the baby whatsoever despite what people are saying

There’s probably more but i wanted to clear those two things up. I have been feeling a lot of regret lately and i can say i haven’t made some of the best choices over the last few months & Doing so on camera & then reliving them all over hasn’t ever been easy

I regret allowing my emotions to take over with cast members. I regret getting sucked into filming about the drama involving people that truly don’t have any effect on my every day life

I really want to focus on growing myself and my brand and work on eliminating all toxic people and situations from my life. So for anyone, fans & supporters included, that I’ve hurt or offended, I apologize

Sometimes i have to look at a situation & be honest with myself & i don’t think I’ve handled things the right way lately. Soooo I’m starting over

Hooking up with someone else won’t get you over your ex.

I know someone is real when they don’t try to dog me out to the public every time we fight. 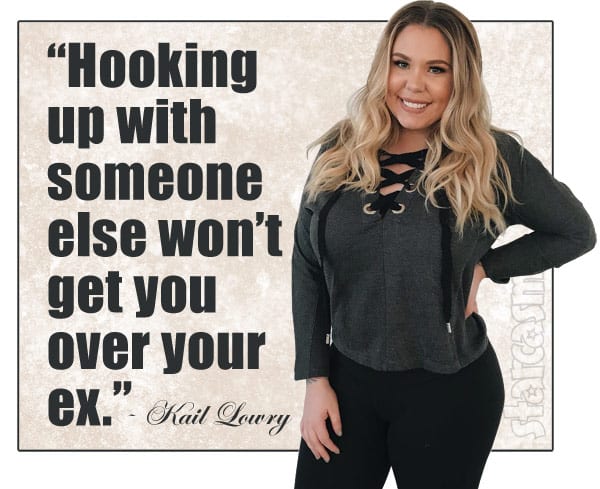 Kail also responded to a tweeter that suggested she had acted like a complete diva at last season’s Teen Mom 2 Reunion. The tweeter wrote that “at times on that reunion she reminded me a bit of Farrah with the demands and entitlement.”

Kail responded by revealing that she was “set up” by producers. “I’ve been doing this for almost 10 years and I never asked for anything that hadn’t already been done in the past,” Kail clarified. “I was set up for that set & I didn’t appreciate it or know how to deal with it.”

I’m glad that Kail is saying she is turning over a new leaf, but I don’t think I would be wagering any money on that panning out any time soon. Actually, I’m already imagining Kail conceiving her fourth child some time this week, and then launching a spin-off series five or six months from now in which she retraces her steps in Europe in search of the baby’s father.

Hmmm… I started that sentence sort of tongue-in-cheek, but by the time I added the period at the end I knew I had a potential MTV ratings gold mine of a concept! Now we just need a title. Any suggestions? The one that came to me off the top of my head is Kail Lowry: From Here To Paternity.

Deavan Clegg ‘in tears’ after researching Jenelle & David Eason’s past