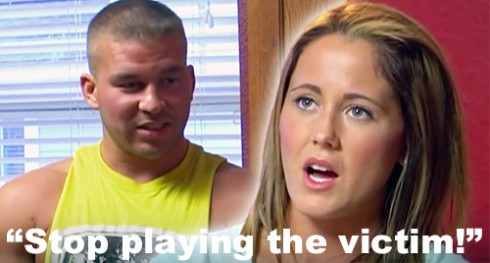 After quite a dramatic episode last week, MTV is keeping the momentum going with this week’s Teen Mom 2. Check out the new preview videos for Chelsea Houska, Jenelle Evans, Leah Messer, and Kailyn Lowry…

While their daughters are preoccupied with painting, Chelsea and Taylor Halbur discuss a plan of action for dealing with their mutual ex-boyfriend, Adam Lind. Taylor was recently in court to block Adam’s attempt for 50/50 custody and Chelsea is nervous about what will happen on her upcoming court date.

“I just think he’s really manipulative and he’s going to tell you everything you want to hear,” Chelsea warned when Taylor seemed to be rethinking her arrangement. “You have to remember why this started in the first place.”

Finally we’re seeing some of the drama between Leah and Jeremy! (Jeremy publicly accused Leah of cheating with her ex-boyfriend in October, but episodes jumped over that and picked up when Leah and Jeremy were temporarily back on good terms.) In the clip, Leah meets Jeremy in a parking lot to hand off daughter Addie for a night with him.

Once Addie is all buckled into the car, Leah tells Jeremy she has “a lot of questions,” emotions and disappointment in regards to what went wrong.

“After I had Addie, our child, I’ve had a lot of issues. I have,” Leah admitted. “Stuff I can’t fix. Wish I could get up and just go. Wish I could feel better.”

“Yeah, but how many times have I begged you to get on schedule?” Jeremy asked. “I’ve got text messages on my phone when you’re up at f**king 4 o’clock in the morning on a school night.”

“I have an issue with that,” Leah said. “But I know that I have done nothing but try to work every issue about me that there is so that I can be a better person.”

Jeremy says he just wants Leah to get help and that starts with her learning to love herself.

Kailyn and Javi are going to Florida, where she plans to meet up with her friend, Sterling… The same one from last week’s ill-fated California trip. Javi isn’t sure Sterling should join them, but Kailyn is frustrated when he tells her that.

“You’re saying that you let go of it, but you’re saying you’re still not a fan of her and it’s still going to be uncomfortable,” Kailyn argued. “Are you embarrassed of yourself?”

That turns into another fight between the couple — and results in Javi having a small car accident.

JENELLE EVANS, Can I Get My Ring Back?

Jenelle is reaching her “breaking point” with Nathan, so she wants to go out for a while with some friends. Even though Nathan is the one who just got home from a two-day break at a hotel, he doesn’t approve of Jenelle’s plan.

“You’ve been at a hotel with god knows who, doing god know what,” Jenelle said.

When Nathan then asks for his ring back, Jenelle refuses — but reassures him she’ll “take it off before I go out tonight.”