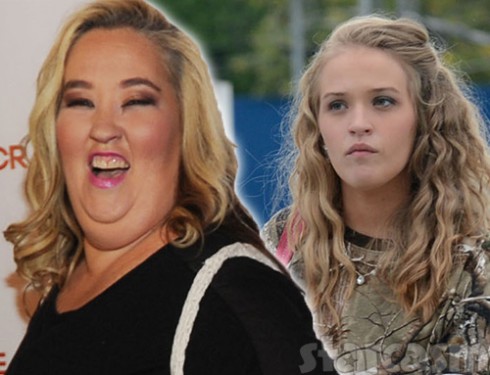 The end of Here Comes Honey Boo Boo was just the start of the real drama for June Shannon and daughter Anna Cardwell. After throwing various punches at each other for the past few months, Anna got the court involved this week by suing “Mama June” for allegedly withholding $300,000.

TMZ reports Anna and her 2-year-old daughter, Kaitlyn, claim in the newly filed lawsuit that June kept for herself their share of $22,500 per each Here Comes Honey Boo Boo episode. Additionally, Anna and Kaitlyn said they haven’t seen any of their profits from the family’s cookbook or other promotions. That reportedly adds up to $200,000 for Anna and $100,000 for Kaitlyn.

Although TLC executives previously said there are separate accounts set up in Kaitlyn, Anna, and her sisters’ names, Anna said her and Kaitlyn’s money has not been adequately protected by the network.

Anna and June’s relationship went from bad to worse this spring, when June criticized Anna’s second pregnancy. Anna responded by saying she will not allow June to be around Kaitlyn or her new baby without other supervision. Anna previously said she was hurt when June began seeing Mark McDaniel, the man convicted of molesting Anna when she was a child. Anna then accused June of draining her trust fund to buy a car for Mark.

Is Saul Goodman real? Is he based on a real person?