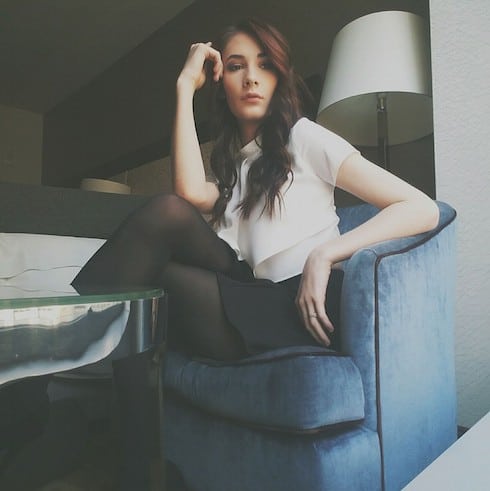 “Growing Up Evancho,” TLC’s hour-long special on the home life and family dynamic of America’s Got Talent phenom Jackie Evancho, devotes a considerable portion of its runtime to the relationship between Jackie and her older sister, 19-year-old Juliet. (We chronicled Juliet Evancho’s transgender journey in an earlier article, which you can read here.) Juliet rose to national prominence earlier this year, after Jackie was asked to sing at the 2016 Presidential Inauguration; she gained further exposure after taking her Pittsburgh-area school district to court over their anti-trans bathroom policy.

On top of all that, Juliet actually missed Jackie’s performance at the inauguration because she was undergoing sex reassignment surgery. So it’s probably fair to say that 2017 has already been the biggest year in her life (though 2015, when she came out as transgender to her family, and 2016, when she went public ahead of the inauguration in a heartfelt Teen Vogue essay, were big as well). But, given her plans for the future, it’s also fair to say that Juliet Evancho before the TLC special airs and the spotlight intensifies even farther is more levelheaded and confident than most of her peers.

But then a string of personal victories will help give your life perspective. For starters, Juliet and her two co-defendants won the aforementioned lawsuit against suburban Pittsburgh’s Pine-Richland school system, in what’s been called a major blow against controversial bathroom bills nationwide. The lawsuit never even went to court: the school board instead chose to settle, voting 6-2 to strike down the ban it put in place in October of 2016 and paying $20,000 to each of the three plaintiffs, plus $75,000 in accrued legal fees.

In praising their victory, Juliet was characteristically humble: “It was a big step for the whole trans community, when it comes to bathroom bills being passed everywhere. I hope this opens people’s eyes to the fact us trans people are still people, and we are not doing anything other than using the bathroom and leaving the bathroom.”

Those comments echoed something that Juliet said to Billboard a few weeks before the school system offered to settle. “Being transgender,” she explained, “doesn’t mean that you’re a monster who hurts children in the bathroom. It just means that you’re being you–and taking steps to be yourself….The whole reason there are issues is because people don’t understand who we are and how we think. Really, we just think normally, like everyday people.”

Furthermore, Juliet told Starcasm that one of her plans for the break year she’s taking following her recent high school graduation is “working with Lambda Legal,” the civil rights organization who handled the Pine-Richard lawsuit. It’s one part of her broader overall plan to continue “advocating for LGBTQ rights.”

As for the TLC special itself, Juliet recently told the Pittsburgh Post-Gazette that “[Being around camera crews] was challenging, but we got used to it.” And, as soon as filming wrapped, the Evancho family made a beeline for the beach:

Vacation is over and it was a success. ? pic.twitter.com/eWeBwZZE3b

And Juliet’s relationship with her father, Mike–who had the most difficulty adapting to his son Jacob announcing that he was now Mike’s daughter Juliet–is the strongest it’s been since Juliet came out to her family. She told the Post-Gazette “I think I can finally say he views me as his daughter, and not as a disappointment.”

Happy Father's Day to the best dad ever! I love you Dad #fathersday #love

One other element bringing stability and joy to Juliet’s life is her boyfriend Deven Grossinsky. The two have been together through the roughest parts of the past year; Deven was by Juliet’s side after she was chosen to be on the homecoming court during her senior year of high school, and stood by her throughout the lawsuit. “He can definitely be a sweetheart,” Juliet said. “It’s been nice; he gets along well with my siblings and he’s kind of a role model for my brother. Because Zach has said, quite often, that it [stinks] he lost his big brother when I transitioned.”

Couple Time! Sharing Vaca with family and our boyfriends was great! An awesome way to relax. #modeling #lovethebeach