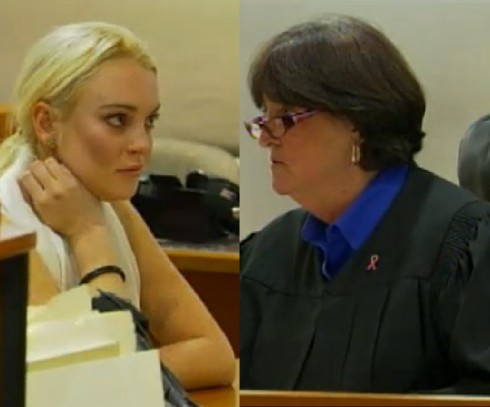 In spite of a surprisingly glowing review from Lindsay Lohan’s probation officer Judge Stephanie Sautner unleashed on the troubled actress with a multitude of ‘give me a freaking break’ explanations.

Sautner doubted Lindsey saw a shrink every week while she was in Europe, basically calling into question the validity of what Lohan’s psychiatrist claimed.

Judge “no more BS” also scoffed at the fact that Lindsay only finished her Shoplifter’s Alternative course the night before the hearing. Sautner stated sarcastically, “Are you noticing a trend here?” In addition the judge called out LiLo for taking 6 moths to complete the 12-hour course.

The final result from the hearing is that Lindsay Lohan’s probation has been revoked and she is now scheduled to appear back in court on November 2nd for a possible determination on whether or not she will return to jail.

A lot of jokes are made of celebrity justice. Judge Stephanie Sautner wasn’t laughing and everything about her tone during the court appearance reflected a judge frustrated with an obvious lack of effort from the defendant before her.

UPDATE: Lindsay was escorted away in handcuffs and could face up to a year-and-a-half in jail.

“She’s supposed to be an actress from what I hear.”

Lindsay Lohan tests positive for cocaine, is she headed back to jail?