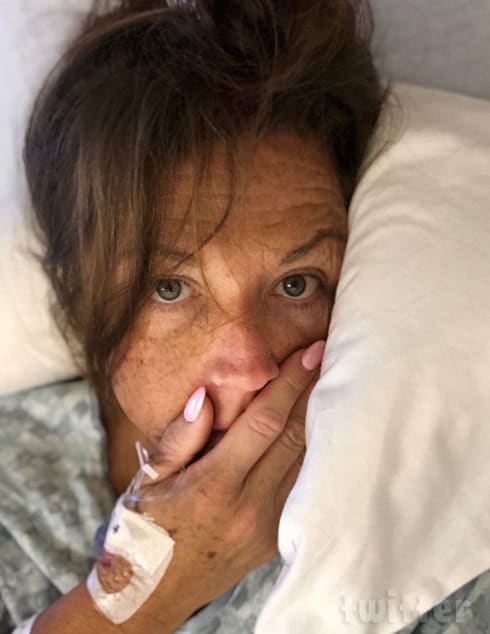 Former Dance Moms star Abby Lee Miller revealed earlier this week that she has been preliminarily diagnosed with cancer in the form of non-Hodgkin’s lymphoma after a surgical procedure to treat what doctors thought was a spinal infection. Abby is still in the hospital recovering from the four-hour surgery; moments ago, she shared the dramatic photo above, along with an appreciative and optimistic message:

So much gratitude and love for those who listened, those who looked deeper and those who leapt into action. So much more I wish I could say……about how quickly your life can change at the hands of others. Thanks for ??❤️ #abbyleemiller #abbylee #aldc #aldcla #aldcalways #dancemoms #iwilldance

JoJo Siwa, who appeared on two seasons of Dance Moms, visited Abby in the hospital on Wednesday and spoke with Entertainment Tonight about her former mentor’s condition. “She’s not good, but she luckily is in good spirits,” the 14-year-old revealed. “She’s not 100 percent on what’s going on right now, which is not the bad thing, she’s definitely in good spirits, but it’s so heartbreaking to see what’s going on. It’s so, so heartbreaking.”

JoJo also spoke with Access about her visit with Abby. “It’s really sad what’s going on. You don’t want anyone to go through that,” she said. “People look at her as ‘the big lady who screams at kids on TV,’ but it’s not the case. She is a human, and she’s nice, and she’s loving — and so it’s so hard to see her go through that. But she has really good people by her side, and I’m happy to be one of them.”

It’s important to point out that Abby’s pre-diagnosis is still awaiting a pathology report for confirmation. That being said, her orthopedic spine surgeon Dr. Hooman M. Melamed seems to be fairly confident about the accuracy of the pre-diagnosis.

“It was not an infection, it was a type of a non-Hodgkin’s lymphoma – it’s a type of a cancer,” he told People. “We’re getting an oncologist involved and we have to figure out what the next steps are as far as chemotherapy or radiation or more spine surgery. Depending on the tumor type, depending on the sensitivity of the tumor – it just depends the type but I feel more than yes, she will undergo chemotherapy or radiation.”