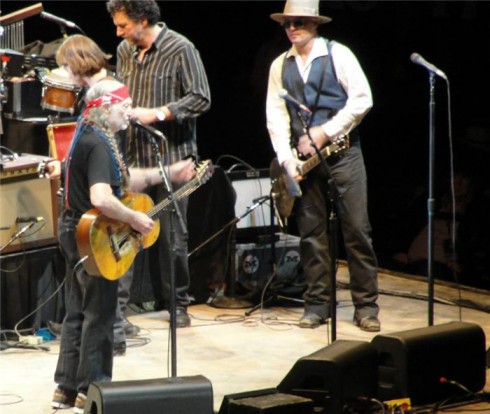 Whether it is a surprise (virtual) appearance by Edward Snowden or a long-awaited show by a fixture in the Austin music scene like Lucinda Williams, Austin’s South By Southwest festival rarely fails to entertain and delight. SXSW is such a draw that artists not included in the official festival program are often drawn to other venues and events in Austin that surf the wave of the SXSW buzz and crowd. Rodeo Austin is one of those venues, and Willie Nelson and family was one of those acts orbiting SXSW 2014.

The concert-goers who turned out to see Willie were ready for a great show, since that’s what he always delivers even now that he’s in his 80’s. But, the crowd probably wasn’t ready for “John,” the incognito Hollywood superstar that showed up to back Willie up on guitar.

SXSW attendees are nothing if not savvy, though, so incognito “John” had no chance of staying under the radar. He can wear a fedora, stare down at the stage, and try to blend in, but if you’re Johnny freakin’ Depp, you just can’t hide!

Here are a couple of audience-recorded video clips of Johnny playing along with Willie on the classic tunes “On the Road Again” and “Good Hearted Woman,” plus some pics tweeted by a couple photographers in attendance.