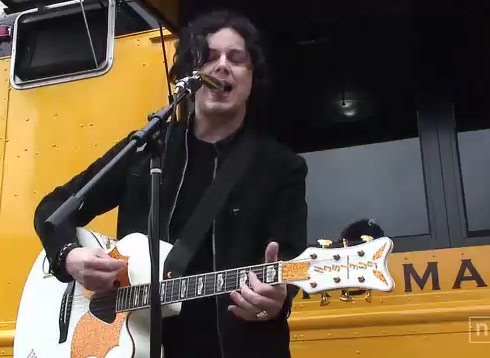 Jack White’s Third Man Records based out of Nashville went mobile and rolled up to Austin’s SXSW festival in the form of a big yellow truck.  All of that’s fine and dandy and hipster “whatever” being that it’s hard to make news at what has arguably become THE music festival but when White himself stepped out with the baddest looking Gretsch acoustic you’ll see and began to belt out Buddy Holly’s “Not Fade Away,” well, BLAMMO!

Yes this happened and yes there is video but it’s not a poorly shot and poorly sounding cell phone clip, its a real deal great sounding one courtesy of NPR.  Oh, and White played one more too, The White Stripes’ “Dead Leaves and the Dirty Ground,” the first song he’s played from the band’s catalog since they officially announced their split.  White was followed by Third Man recording artist Seasick Steve.

SXSW you are ridiculous and wonderful. Keep it weird Austin!