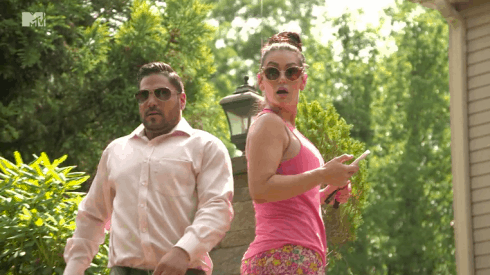 On tonight’s episode the Jersey Shore crew is shocked to see Ronnie show up at Deena’s gender reveal party in New Jersey looking healthy and in good spirits. The last time they saw Ronnie he had been hospitalized in Las Vegas after a physical altercation with his girlfriend Jen in which he had been punched in the face and dragged by her car.

Snooki says in a preview clip that seeing Ron at the garden gender reveal party made her feeling like she’d seen a ghost. “He’s been in the hospital, and now he’s hair gelled, he’s showered,” Snooki explains.

“Seeing Ronnie is like seeing Bigfoot,” Vinny says. “You hear about him on TMZ everyday, and to see him in person is kind of wild. I don’t know how to react.” They Ron about his arm, which was probably really busted up after the altercation. He’d posted pics of his injury on his Instagram story.

Not only were his friends shocked to see him looking so good after such an ordeal, but it was also surprising to see him mend fences with Deena. He sits down with her and lets her know that he’s happy for Deena and her husband Chris Buckner.

Did The Situation stay sober for the last season of Jersey Shore?