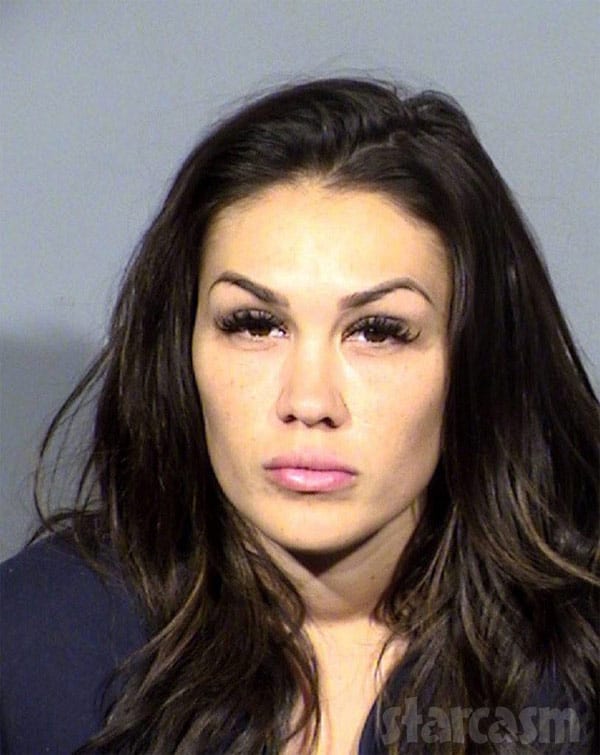 As we reported earlier, Jersey Shore: Family Vacation star Ronnie Ortiz-Magro’s ex Jen Harley was arrested in Las Vegas Sunday night and charged with domestic battery for allegedly dragging Ronnie with her car after a heated exchange in which she reportedly hit him in the face while driving. The Las Vegas Police Department has since released Jen Harley’s mug shot photo (above), and it is intense to say the least!

In addition to Jen Harley’s mug shot photo, we also have a little more information about the incident. The Blast contacted LVPD and reveal that “a call came into police from a caller who indicated that there was a suspicious vehicle with two flat tires on the side of the road and a bleeding man standing outside who was trying to pull the female out of the vehicle.”

That account lines up with an earlier report that the couple was headed home from a barbecue and got into an altercation. Jen reportedly hit Ronnie in the face before “the car hit something that popped a tire,” according to a source for The Blast. The source says Ronnie attempted to exit the car to get away from Jen, but Jen took off dragging him.

A source told TMZ that Ronnie got tangled up in the seatbelt prior to Jen pulling away.

The witness told police that the man was bloody, so clearly this was after the accident. The fact that the bloody man was described as “trying to pull the female out of the vehicle” sounds a bit concerning. Also, if what the witness said is true, then that means Jen most likely attempted to drive off and dragged Ronnie with two flat tires.

It’s important to note that the sources for both TMZ and The Blast stated that the couple’s nearly 3-month-old daughter Ariana was in the vehicle at the time. So remember, Ariana was in the vehicle when the two were fighting (while Jen was driving!) causing some sort of incident resulting in at least one flat tire. And that was before the alleged dragging and any other physical altercation that followed.

My guess is that we will soon be hearing a slightly different version of the story from Jen’s camp. Regardless, it is a horrific situation for an infant to be in and I sincerely hope that there is some sort of custodial intervention from family, friends, the courts, or CPS. At the very least there should be a mutual restraining order put in place keeping Ron and Jen apart. All of the anger issues and violent incidents that we know about involving Jen and Ronnie since Ariana’s birth have occured when the two of them are together, so it only makes sense to keep them apart.

Meanwhile, there has still been no official statement from Ronnie, Jen, or MTV about the most recent incident. Stay tuned.

Us Weekly was the the first to report Jen Harley’s arrest.

LOVE AFTER LOCKUP Elizabeth Kommes back in jail