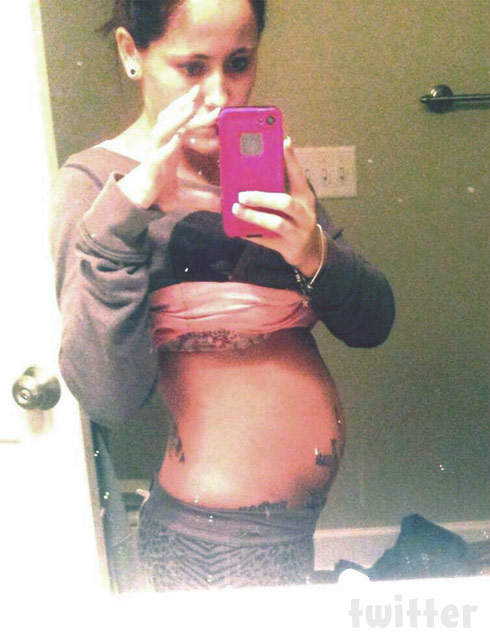 In case you haven’t heard, Jenelle Evans is pregnant again with her boyfriend Nathan Griffith’s child, and the expectant mom and dad are currently in New York City with the rest of the cast of Teen Mom 2 making the press rounds promoting Season 5 of their show, which premieres Tuesday, January 21 at 10/9c on MTV. On one of her many stops, Jenelle spoke with Wetpaint about her pregnancy and revealed not only her due date, but the names she and Nathan have picked out for Jace’s sibling!

And what does Jace think about having a little sibling on the way? “He’s really excited,” Jenelle tells The Stir in another interview. “Every time we go out to the store, he’s like, ‘we can get that for the new baby!'” Jenelle adds, “He keeps asking me, ‘When’s the baby going to come out? Why is it taking so long?’ He’ll change from ‘I want a boy’ to ‘I want a girl.'”

So will Jace be getting a little brother or a little sister? Jenelle says she and Nathan haven’t found out the sex of the baby yet, but that will probably happen later this week. And when it does, she will of course make the announcement online!

But don’t worry, Jenelle and Nathan are ready for a boy or a girl, and have names picked out for each.

“I let Nathan pick the guy’s name which is Kaiser, but we haven’t picked a middle name yet,” Jenelle tells Wetpaint. “And if it’s a girl it’s going to be Lydia Marie.”

Jenelle says that the names don’t have any hidden significance, she just likes the sound of them. (Although I can’t help but think choosing the German word for emperor as a name for her son is at least a small gesture to her many online detractors.)

As a blogger I suppose I’m hoping it’s a boy, because then I’ll be able to make numerous “Kaiser bun in the oven” references. 🙂

So what do you think about the names Kaiser and Lydia Marie?

Jenelle Evans rescues her panties with Gary Head and… an AK-47?!?