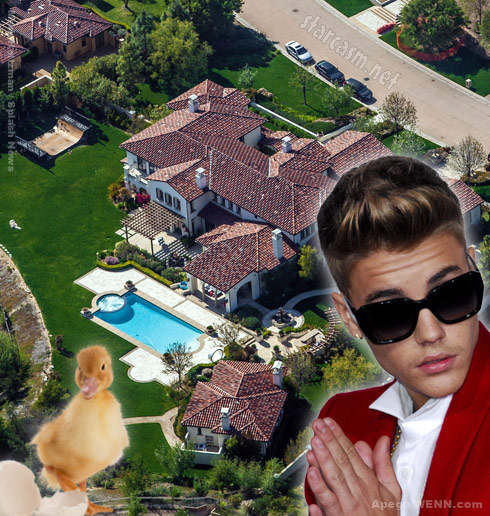 The Los Angeles County Sheriff’s Office came out in full force, reportedly 11 patrol vehicles, to execute a search warrant of Justin Bieber’s Calabasas home over an egging incident. Yes. An egging. Because Bieber…

Thursday night the “Baby” singer did his best to prove he’s no baby but instead a bad boy by egging his next-door neighbor’s home and the incident was caught on camera (sigh). When The Biebes was confronted by the world’s unluckiest real estate purchaser, Justin didn’t apologize but instead decided he’d toss a few more unhatched chickens while telling the guy to f**k off.

It turned out that EggGate was going to cost this unfortunate resident $20,000 to repair. Because of the value of the damage the search warrant executed this morning for the “Bad Ass of Calabasas” was of the felony – FELONY – variety.

Authorities informed TMZ they were looking for anything that would link Bieber to the crime. They also dismantled J.B.’s home security system and took it with them.

Here’s where things could get interesting and result in egg in Bieber’s face. Since the authorities had a warrant anything illegal found in Justin’s pad is fair game.

UPDATE: The cops found cocaine and someone got arrested!

Will Justin Bieber be arrested, criminally prosecuted for assaulting a paparazzo? Plus, listen to new song