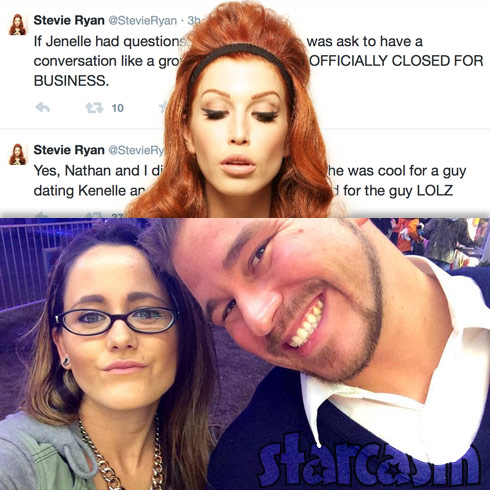 It’s still not really clear exactly what is going on with Teen Mom 2 couple Jenelle Evans and Nathan Griffith after Nathan tweeted and deleted a break up announcement last week. Jenelle has shared some things on social media that suggested the couple is fine, however, on Tuesday she wrote a series of messages that don’t mention Nathan by name, but seem to suggest they are still having issues.

“So depressed,” She tweeted Tuesday afternoon. “How could u repeatedly hurt me the way u do? I thought u were my best friend, come to find out u r my enemy. 🙁 ” As I mentioned, this could be in reference to someone other than Nathan, like her friend Tori for example. Her next two tweets, which were two hours apart, were the same. “Boy, fame has def gotten to your head.” She ended the day by adding, “So depressed. 🙁 ”

Meanwhile, Nathan hasn’t really shared much at all on social media, aside from a muscular selfie Tuesday and on Monday: “You really don’t know someone or who they truly are until you talk to them.” BUT, some believe that Nathan’s Twitter account may have been commandeered by Jenelle! And one of those who think this way is actress/comedian (and Teen Mom 2 drama addict) Stevie Ryan from VH1’s Stevie TV!

This requires a bit of a set up…

Stevie was following along with the Proposalgate drama from earlier this month, and at some point she was blocked by Jenelle on Twitter. Then, on Friday, Stevie realized Nathan was following her:

@KerriSummer @ShellLyLy @lordevans2015 This is amazing! Jenelle has me blocked, so she's going to be really pissed he's following me

The next day Stevie seemed to be Jonesin’ for some drama and made a public appeal to Nathan to return to Twitter. “@GroundLevelUp come back to twitter,” she wrote, “We miss you ♥”

Stevie got her wish when Nathan returned with a message for her. “@StevieRyan you only miss making fun of me you redheaded firecracker. Lol.” Stevie responded flirtatiously and included a selfie of her damn fine, non-redheaded self to boot:

@GroundLevelUp I don't make fun of you Nathan, just the choices you make… And I lost the red bb… #NoFilterNeeded pic.twitter.com/sK3lOCIUAe

Nathan then responded, “…? Tsk tsk you know you should play nice. Bad karma sucks.” (Some have speculated this was actually Jenelle.”

After this, Stevie and Nathan apparently talked via direct message and Stevie shared the experience. (It should be noted that now there are two additional Twitter accounts — @Groundlevelupp and @groundlevelup1 — both claiming to be the real Nathan Griffith.)

Yes, Nathan and I did have a nice lil chat and he was cool for a guy dating Kenelle and very level headed. I feel bad for the guy LOLZ

Guys, Jenelle is pretending to be Nathan on all those twatters. I will confirm his new Twitter in a few since we are BFF’s now… Standby

@Groundlevelupp shut up Jenelle. Nathan would never talk to me like that!

I’ve literally been sitting in a parking lot dying over yalls tweets. Need to get my ass home and catch up! Brb

Nate confided some REAL f**ked up sh!t about JE (which I will not repeat because I keep my word) and we continued to go back and forth. I gave him some solid advice (because I’m a secret therapist) Told him Kai is all that should matter and they’ll lose him if they continue to act irresponsible. I realized he’s an okay guy in a toxic situation. He thanked me for the talk.

Then today I get all these crazy DM’s. JE had obviously broke into his Twitter and was sending me psychotic messages about Nathan trying to shoot her up (insert eye roll) and all kinds of BS that made no sense. Next thing I know, twitter starts blowing up. And the rest is…. happening right now.

If Jenelle had questions, all she had to do was ask to have a conversation like a grown woman. But I’m OFFICIALLY CLOSED FOR BUSINESS.

Stevie’s last tweet before this post was in the true Teen Mom 2 Twitter drama tradition in that it announced she would be deleting all her Jenelle tweets and they would have to live on in screen caps (and blog posts). “Yall better get your screen shots now because I’m deleting those JE tweets soon,” Stevie wrote. “Makes my page like a look sloppy wh*re page.”

So there you go! So by this time tomorrow there will probably be 50 Nathan Griffith Twitter accounts, all of which will be rumored to be hacked by Jenelle. To be honest, I have no idea what to think about all this. The only thing I know if that Stevie Ryan sure is hilarious. 🙂

* It should be noted that Stevie tweeted at one point, “From what I know, Nathan’s ONLY/REAL Twitter is @groundlevelup1 but it’s only a matter of time before JE high jacks it.” That is actually different from his original Twitter ID @groundlevelup. So either Nathan had confided with Stevie that the new account was actually him, or else she had the wrong one, although she had been interacting with his correct account earlier. But, just like Stevie wrote, “Who cares if it was him or Jenelle [or some random person with a fake Nathan Griffith Twitter account]? It was fun.”