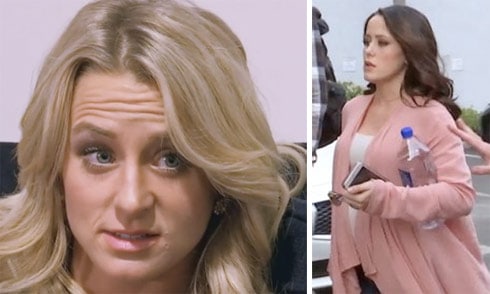 We’ve got a tale of two reunion sicknesses in the latest batch of Teen Mom 2 previews!

Chelsea Houska and Jenelle Evans, both very much expecting at the time of the taping, each decide to take a break from filming the reunion show due to illness. These teasers certainly make it appear as if Chelsea gets the benefit of the doubt about her claim. As for Evans, not so much… Especially from co-star Leah Messer.

Chelsea takes her temperature and it reads 99.5 as she explains that she doesn’t want people to think she’s not being serious if she goes home. Executive Producer Morgan J. Freeman and two other producers on hand are all understanding and emphasize to Chelsea that her health comes first.

And just in case, Cole is carrying like 5,000 bottles of water!

Kail Lowry is chatting about her turbulent relationship with Javi Marroquin when a producer gets a text that Jenelle has decided that she’s leaving due to her own illness. Kail kinda sorta jokes that she wishes she could head out and the producer exclaims while dropping some expletives, “No you can’t leave. Nobody can leave.”

The producer rushes outside as Jenelle, David Eason and Jace are heading to the parking lot. Evans explains that she’s been complaining about not feeling well for a couple of hours and that no one was doing anything about it.

Eason emphasizes that Jenelle’s health is all that matters and the producer says “I understand that” before the preview ends.

Leah’s backstage chillin’ when she’s asked what she thinks about all the drama going on with Chelsea and Jenelle. At first she tries to remain neutral as she says it’s none of her business. But…

Leah: Chelsea is sick. I do not blame her, she is carrying a child she needs to go ahead. Jenelle ran with her child… Who knows? But she gets paid for this she should be here.

UPDATE – Jenelle has since responded to the preview clips in a series of tweet ‘n’ deletes, including a rather irate response to Leah being so unsympathetic.

Stay tuned to the season finale tonight on MTV at 9/8c.