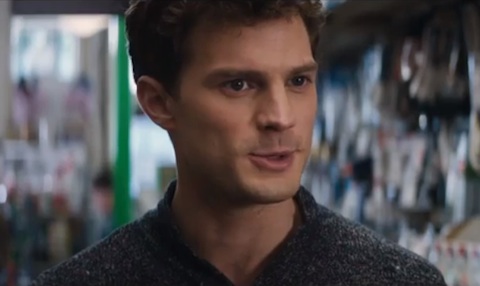 Universal has released the first full scene from the upcoming romantic comedy Fifty Shades of Grey. In it, Christian pays Ana a surprise–and sexily unsettling–visit at the hardware store, where Ana works, convincingly. He makes a series of innocuous selections, all of which could be used to bind together human hands and feet, if one were inclined to use them for that purpose. It’s an interesting choice for the first release, and doubtless has been given to us to heighten our collective anticipation for the upcoming sexy times. Here’s the scene, in all its hog-tied glory:

The release comes on the heels of an Entertainment Weekly story that says approximately one-fifth of Fifty Shades‘ 100-minute running time is devoted to sex scenes. That’s twenty minutes of the film, for those of you keeping score at home, and is a much lower percentage than in the book. (Proving, once again, that the book is always better.) One-fifth is still somewhat higher than the average Hollywood rom-com, so fans of the full-on will get more than their fill. And Universal, in a corrective statement, said that twenty minutes is “somewhat inaccurate,” but declined to say how inaccurate the figure was. When asked if the film has more than twenty minutes of sex in it, the Universal exec would only smile and tap his nose, knowingly. 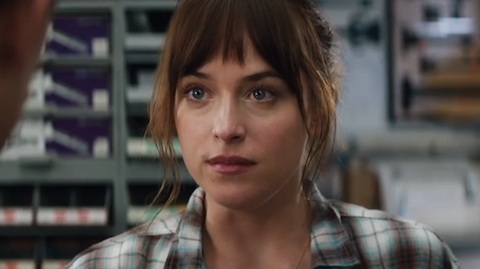 We’ll all find out soon enough: Fifty Shades drops in just nine short days, on February 13th. In the meantime: Did you enjoy the clip? Was it romantic enough for you–and comedic enough? Are you going to see this film? Will you see it twice?

Spider-Man 4 canceled! Tobey Maguire, Sam Raimi and cast are out!