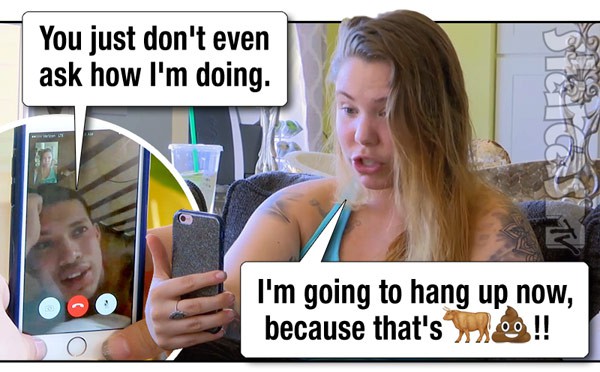 We’ve got a batch of four brand new preview clips for next week’s episode of Teen Mom 2! The videos include Leah and Corey discussing Ali’s eating issues, Jenelle’s first on-screen mention of her “mystery illness” that would eventually land her on The Doctors TV show, the first on-screen hint that Kail and Javi might be having serious relationship issues, and Adam Lind potentially missing out on Aubree’s father-daughter dance.

It’s another kid swap parking lot scene for Leah Messer and Corey Simms as he picks up Ali. After she gets in his truck, Corey expresses some concerns he has about Ali with Leah.

“I was going to say, the next time we go to Columbus — if I can’t go, we might want to mention about her diet,” Corey says.

“About how she’s not eating,” Corey explains.

“She eats with me,” Leah counters.

“She eats, but she doesn’t eat enough,” Corey argues. “She’s been not eating for a while. If we weighed her now, she weighs 34 pounds.”

Leah seems surprised. “When we took her to the doctor –”

Corey interrupts. “I think she’s lost weight because she was almost 40 pounds. I know she was up close to 40 a while back, and that’s when we –”

“When I did the booster she was close to 40, and you gotta be 40 pounds to get a booster. Well, I didn’t write it down or nothing, but it was — I’m pretty sure she was almost 40 pounds.”

“I’ll have to make her a doctor’s appointment I guess,” Leah concedes.

I feel I should mention that Leah has been criticized often this season for what her children have been seen eating and drinking, and in last night’s episode she let her youngest daughter Adalynn eat chocolate icing right out of the container. 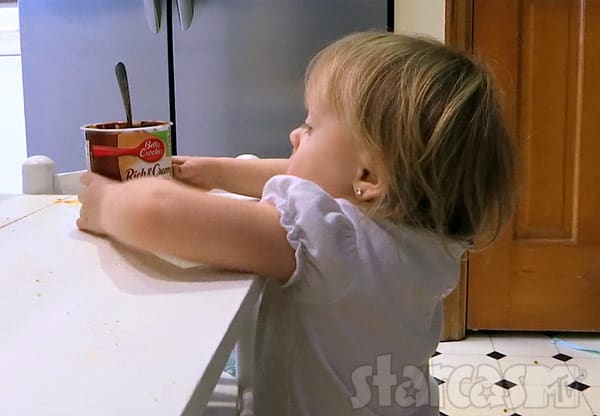 “Is it bad that I’m going to let Addie eat icing?” Leah asked her mom. “Just have her sit at the table,” Momma Dawn replied.

On another side note, we were hoping this week’s preview clip would shed some light on the “disturbing video” that “shatters” Leah and Corey’s coparenting, as described in MTV’s synopsis for the upcoming episode. But, unfortunately, it looks like we’re going to have to wait until Monday night for that.

Jenelle and boyfriend David Eason are in New York City where she hopes to get an accurate diagnosis of a mystery illness that has been plaguing her for months.

“I’m tired,” Jenelle says in a raspy voice as she and David sit down in a diner. “Oh my god I’m tired! What is wrong with me?”

“You just need to see the doctor, figure out what’s wrong with you,” says Uncle Dave.

Jenelle busts out her iPad. “So anyways, I started writing down my symptoms like hot flashes, hard staying asleep, sometimes feeling of insomnia, numb fingers, shakiness, anxiety, depression, restless leg syndrome, eyes hurt, eyes feel huge, knee joints click when sitting, back pain, head feeling like it’s non-stop shaking, my tongue was numb — or couldn’t taste anything, loss of appetite, loss of balance, dizziness, extreme weakness, loss of coordination, feeling of being in a fog, cannot spell or put sentences together, hard to read, uncontrollable body jerks at times, pins and needles in hands and feet at times, itchy legs, and I had that migraine the other night — remember, that would not go away? I was up until, like, three in the morning with a migraine. Oh my god. And it seems like I’ve been bed ridden for three weeks now. Like, I can hardly get up and you’ve been having to take care of Kaiser for me, and help me out tremendously because I can’t even get out of bed.”

CHELSEA HOUSKA
“Adam A No-Show To A Father-Daughter Dance?”

In the beginning of this clip we see Aubree reaping the benefits of having a certified esthetician for a mom as Chelsea shows off her curling iron skills. Mom and daughter talk about Aubree’s upcoming father-daughter dance and Aubree says her teacher told her it was alright if she brought both Cole and Adam to the dance.

“So if your dad doesn’t call or anything, you’re OK with going with just Cole?” Chelsea asks.

Chelsea continues to curl and chat. “Are you guys going to dance?”

“Mmm hmm,” says Aubree. “Cuz you know it’s called the father-daughter dance,” she adds with a just a touch of snark.

“You’re a turd,” jokes Chelsea, before taunting Aubree a bit by suggesting she might attend the dance. “I’m gonna go.”

Aubree is having none of that. “You can’t!”

“Yes I can,” Chelsea says calmly.

“No you CANNOT!” Aubreee insists and smiles.

“I can wear a mustache and boy clothes,” Chelsea teases.

“Why?” Chelsea asks. “No one would know.” Chelsea then lets loose with a HUUUUGE belch. “See? I can do that!” 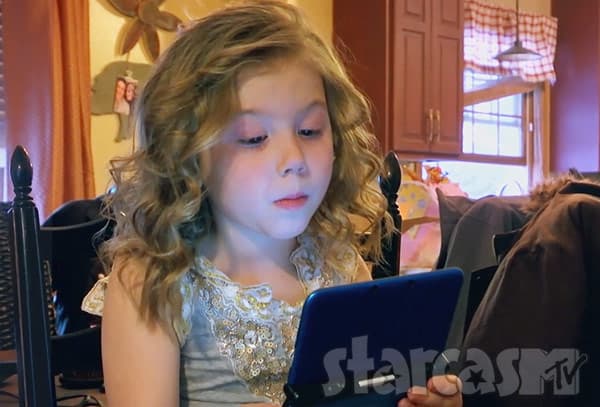 The conversation gets a little les gassy and a little more serious. “If your dad does call, do you want to go with Cole and you dad, or just your dad?”

“Cole and my dad,” says Aubree.

“You’re a nice girlie,” says mom. “That’s nice of you to include him babe. You know that? Why is it important to include him, you think?”

“Because he’s my other daddy,” says Aubree.

Chelsea goes back to get Cole and informs him that Adam still hasn’t texted. Cole comes out looking even more handsome than usual and he poses with curly-headed Aubree for some photos.

* I should point out that it is still unclear if Adam actually shows up at the dance or not, only that he didn’t let Chelsea know one way or the other.

KAIL LOWRY
“You Don’t Even Ask How I’m Doing”

Kail and her deployed husband Javi Marroquin have another FaceTime chat that begins with Kail telling Jo she texted Vee and the two were planning on meeting up for lunch.

“I mean, neither one of us have anybody here right now, so it’s like, why not?” Kail explains.

“What do you mean neither one of you have anybody right now?” a confused Javi asks.

“Like, she doesn’t have anybody in Delaware besides Jo, so I figured I would text her and go to lunch with her.”

The conversation shifts. “How is work?” Kail asks.

“Long,” says Javi. He then explains that he had to wake up at four o’clock to go to work. “So I’m freakin’ tired all day,” he says.

“Well, you can sleep when you’re dead,” says Kail. (Probably not the greatest thing to say to someone in the military who is deployed overseas?)

“What is wrong with you?” asks Kail. “Why are you cranky?”

“Just — I don’t know. Just want you to show some emotion sometimes.” 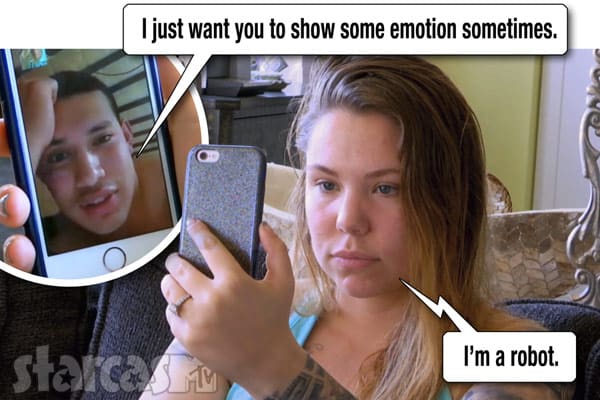 After a pause, Kail says: “I don’t think any deployment is a fun ex–”

“So what are you saying?” asks Kail.

“Just [inaudible] a feeling. Like, what emotions go through your body. I mean honestly, you act like you just don’t care about it. It would be nice if I could share some of my stories and tell my –”

EXCLUSIVE Why Kailyn Lowry stormed off the Teen Mom 2 Reunion