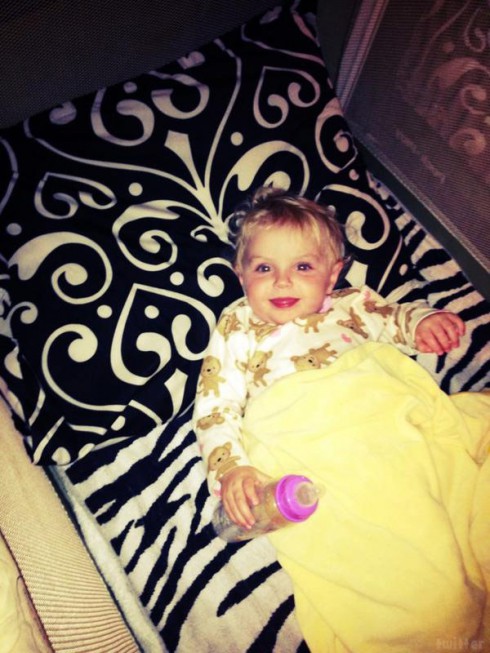 Teen Mom 2 star Jenelle Evans found herself in the middle of a dramatic custody dispute this weekend involving her boyfriend Courtland Rogers’ infant daughter Jordan and Jordan’s mother Taylor Lewis. (CLICK HERE to find out more about Courtland and his daughter, including lots of photos!) Jenelle shared the above photo on Thursday along with the tweet: “Who’s ready for the new addition to our family. Lil miss Jordan Rogers <3 ;)”

A follower responded by writing, “Aw she looks so sweet! 🙂 do you two have her all the time now?” to which Jenelle responded, “yes we do :)”

Meanwhile, Jordan’s mother Taylor Lewis wasn’t as happy about the situation, posting on her Facebook wall: “i miss you jordan so much cant wait to have you in my arms again uggghhh this sucks ♥” She then added in the comments section: “her dad took her and wont give her back shes been gone 3 days nw” 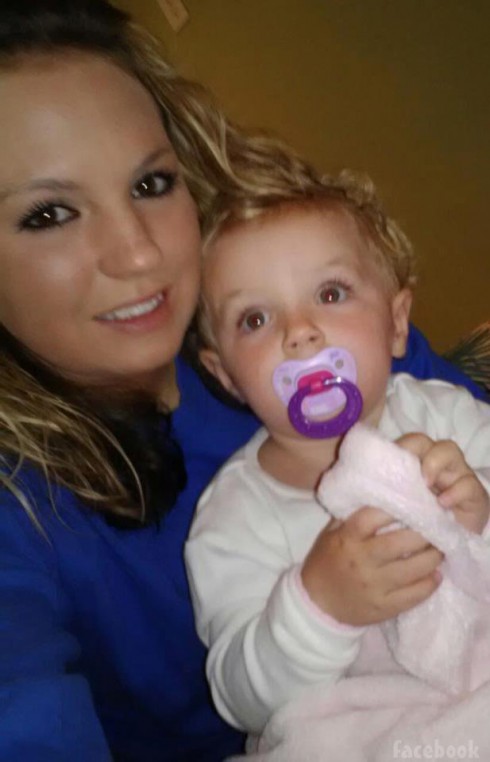 Jenelle responded to Taylor’s comments by tweeting: “we didn’t even have her for 3 days lol ONE night then to the babysitters cuz I was in the hospital all night” (In case you missed it, Jenelle was in the hospital with severe pain stemming from her recurring problems with ovarian cysts.)

While Jordan was with the babysitter, her mother Taylor Lewis showed up and took her back – much to the dismay of Courtland, who posted on his Facebook page, “”I HATE YOU TAYLOR LEWIS 1!!!!! U JUST REALLY DID SOMETHING STUPID AND ALL I HAVE TO SAY IS THAT I FIGHT FOR WHAT I LOVE AND I SWEAR I AM GOING TO GET FULL CUSTODY OF MY DAUGHTER…..OMFG I HATE YOU…” He then clarified that “she took my daughter from me…..AGAIN!!!!!!!!!!!!!!”

We spoke with Jenelle and she confirmed that Taylor now has Jordan again. “Taylor took Jordan away from Courtland’s babysitter last night. So she is gone again,” Jenelle says. “It sucks for him,” she adds. 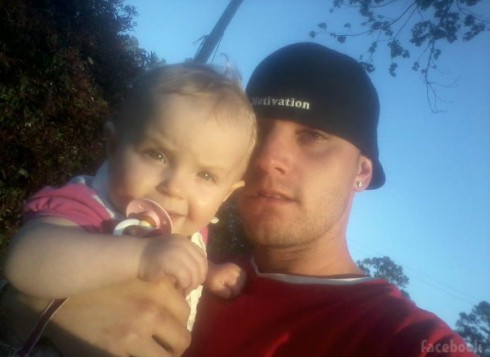 And why was Jordan at Courtland’s sister’s? Jenelle pulled no punches when she explained that situation! “Courts sister received a call at 2am to ‘come pick up Jordan’ Taylor was not in the right state of mind,” she tweeted. “Then of course we took her in becu Taylor got kicked out of a state troopers house she lived with that night and she’s house hopping now with her daughter… When our environment is 100% stable and safe.”

Later, after people began accusing her and Courtland of kidnapping Jordan, Jenelle took to Twitter to dish a little more on Taylor:

“Courtlands baby mama said we stole her daughter. It’s not called stealing when both parents have half custody in NC. She smoked crack and handed his daughter over to Courtlands sister at 2am. Her whole family is f***ed up. Her dad is in prison, mother stripper, GRANDMA locked up. There’s the truth everyone.

“If we knew where Courtlands daughter was at this moment we would go get her, but guess he has to go to court… And his baby mama will NOT tell us where she is. Last time we knew she was at a crackheads house with like 5 dudes. 🙁 sad… The only reason I said something. Is becuz rumors r going around saying we kidnapped her? Lmfao wow really? F*** that.”

We asked Jenelle about Courtland’s relationship with Taylor Lewis and she basically said there isn’t one. “She was a one night stand to Courtland. That’s all, no relationship, nothing special, but he still cares and love his daughter to death and is in the process of getting his daughter back.”

And speaking of Courtland being in the process of getting Jordan back, Jenelle has been tweeting updates and receiving suggestions all day.

“We called the cops and so did she and they said doesn’t matter which parent has her [they] both have rights to her,” Jenelle pointed out to one commenter. Another fan suggested Jenelle call Child Protective Services, to which Jenelle responded by writing, “we r going to do something about it on Tuesday when the courts open.” Another commenter demanded that they not wait and go get Jordan immediately, but Jenelle revealed, “we don’t kno where she is 🙁 his baby momma will call us over 30+ times to cuss us out but not tell us where she is…”

Adding fuel to the fire is the fact that Taylor doesn’t seem to care for Jenelle, possibly because she wants a relationship with Courtland. Jenelle says of Taylor’s feelings for Courtland: “I think she wants him back because she said, ‘You can only see Jordan when Jenelle isn’t around.'”

At the time of this post, Jenelle’s last tweet stated she was trying to find an emergency number for CPS that would work on weekends.

We will keep you updated on the situation.

UPDATE – Courtland just tweeted this heartfelt plea: “i miss my little girl so bad !!!!! i need her with me RIGHT NOW !! i am so worried about her being with her mom!! i gotta rescue her !!!HELP”

UPDATE – Taylor Lewis’s sister Kristen Lewis has taken to Twitter to defend her sister. Here’s what she posted over a series of tweets on November 12:

quit playing games and man up courtland you cant even pay your child support.

@PBandJenelley_1 go ahead and block me dont care i dont even get on here made it a long time ago so tell courtland to quit calling my phone oh yeah by the way go ahead and call social services because your only wasting your time taylor stays with a state trooper and im sure as soon as they see the house and drug test taylor the case will be closed.

TEEN MOM 2 Jenelle Eason and mom Barbara Evans do yoga together, The Land may expand to other states