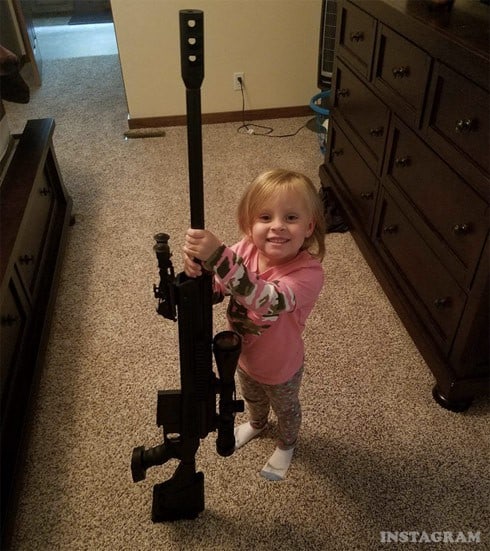 The ex-husband of Teen Mom 2 star Leah Messer posted a photo of their 3-year-old daughter Adalynn holding a large rifle.

As pics of adorable toddlers holding huge firearms are known to do, the image sparked a comment controversy over whether or not it was appropriate for Jeremy to have his young daughter posing with a gun.

Calvert assumed some would take umbrage so he made sure to let everyone know that the rifle was not armed. “She said daddy, lets go hunting and shoot a coyote… lol better watch out boys she wont miss lol haha p.s. yes people its a gun and its also unloaded get over it…. #daddieshunter #mybaby,” he captioned the post.

One commenter wrote, “This time it’s not loaded, what about next time she thinks it’s ok to grab it and you actually have forgotten to unload it! ‘Let me take a picture of my baby Daughter holding a gun…’ What an idiot!”

Another added, “Still not cool. I would never let a child hold a gun. Even unloaded. I’m all for hunting and providing food for your family. But this is so wrong in so many ways. Silly Americans ? .”

Calvert had a not so nice response for one person who had a problem with his post. “Go suck a c**k — fake a** profile cause ur a little b***h f**k off,” he retorted.

After a bunch of back-and-forth between folks who opposed and supported Calvert’s actions, he made a separate Instagram post explaining his position: 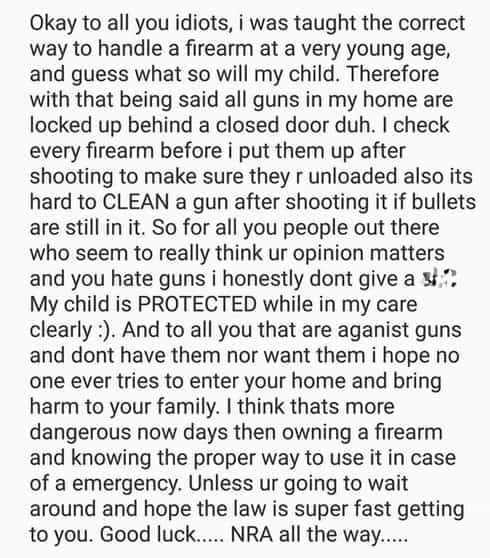 A supporter wrote, “There is always going to be someone who has something to say. The ones that have the most issues are the first to jump down someone else’s throat, you are a great dad from what I can tell. People own guns always have always will, as long as you take all the safety precautions then you are doing great. Not sure why people follow people on here just to bash them. Like I said don’t listen to them, you know that you take care of your daughter and protect and she knows that and her opinion is the only one that should matter.”

Do you have a problem with this photo of Adalynn?

Judge rules against Jenelle and David Eason in custody case