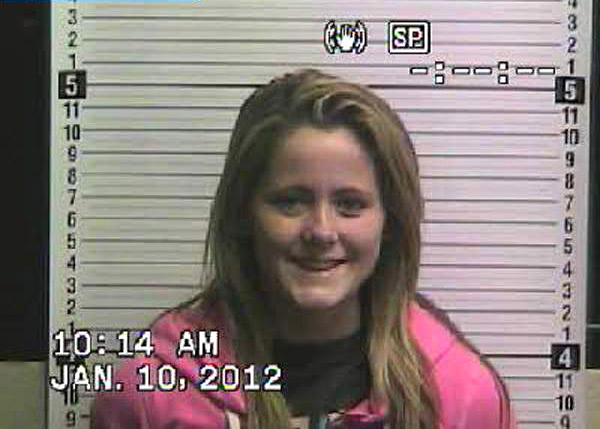 Jenelle was booked today, January 10, 2012 at around 10:15 a.m. in Brunswick County for “harassing phone calls” and “communicating threats,” according to Brunswick County Sheriff’s Office. She posted a $1,000 bond, and was out of jail before noon today.

Jenelle’s former roommate Hannah Inman was reportedly the one who pressed the charges, claiming Jenelle had threatened her life in the past. Around the time of the arrest, an emotional Jenelle tweeted “So upset can’t stop crying. I might just run far far away and never come back.”

Jenelle told starcasm.net that there is no validity to these charges, and thinks this happened to get back at her for pressing cyber-stalking charges against James Duffy earlier this week. Jenelle’s lawyer Dustin Sullivan also thinks the charges were “retaliatory.”

In an statement to starcasm.net about the situation, Attorney Sullivan said this:

Yes, Jenelle was charged with those charges today after she had taken charges out on James Duffy several days ago. Obviously, I feel that these charges against Jenelle are completely absurd and retaliatory in nature.

According to Jenelle, Hannah said the alleged threats were what caused Hannah to move out, but Jenelle says she has evidence that proves Hannah moved out to move to New Jersey with Duffy to achieve fame through her singing career.

Yes I was arrested again. It’s okay, Hannah’s just calling her own bluffs. How can I harass u with phone calls when u clearly don’t own a cell phone? I’ve dropped this argument weeks ago. Haven’t been paying attention to u but u have the balls to tell yr little “fans”.. “imma f**king kill that bitch” ?! How’s threatening who here ?! Lmao she’s mad cuz I took out charges first on Duffy for cyber stalking. She claims that she move out becuz I said I would “eventually kill her” when clearly her old phone has texts that states “look I’m moving out to yr house Duffy so we can move to new jersey so I can get famous for my singing”. Yes u set me up and yes u will go down. CAN’T WAIT FOR COURT!

Not to mention I REALLY dot give a f**k about Hannah or Duffy when I’ve been in and out of the hospital for 3 weeks now with mono/strep and have to get my tonsils out. Yeah as I’m about to walk out the door to go to the hospital the cop is at my door and I got down on my knees and poured out tears. I was so upset. I had to go to jail THEN go to the hospital. I feel like sh!t, would greatly appreciate it if everyone would drop it. K?! Thxxxx !

After she left jail, Jenelle’s mom took her to the hospital, where she was diagnosed with strep for the third time this month.

This isn’t Jenelle’s first tangle with the law. Here’s a timeline of her past arrests:

October 2010 for breaking and entering and marijuana possession.

March 2011 for a caught-on-video fight with another girl