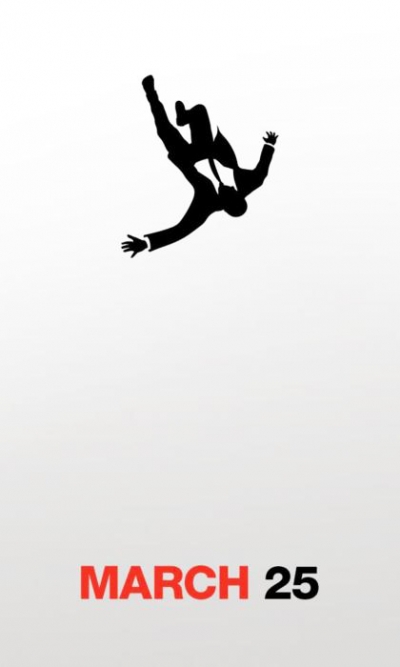 On March 25th Mad Men comes back to AMC with their 5th season, so naturally the network is getting its promotional engines warmed up. As part of their marketing material, they have released a minimalist promotional poster for the new season that features a silhouetted man in a suit falling on a white-to-light-gray gradient background with just the words “March 25” along the bottom. The image is graphically striking in its simplicity, but according to sites like Salon and Wet Paint, the poster is causing a bit of controversy from folks who think it is an obvious reference to 9/11.

If you’ve watched the show, you probably remember the animated title sequence of the show with its retro minimalism and desperate psychological tension. You probably also remember that the action that unites the sequence is the image of a man in free fall.

So, the new poster doesn’t come out of nowhere. It pushes the minimalism even farther by “filling” most of the space with a blank white field. There is no title. No commentary. No explanation. And, yet, if you haven’t been living under a rock for the last 4 years, you probably know exactly what it is all about.

So, what’s the problem? Well some people who have seen the ad are reminded of 9/11 and the tragic deaths of those who threw themselves out the windows of the twin towers.

On one hand, I see what they mean. The pain of 9/11 is still very fresh, and that specific part of the tragedy is particularly awful. On the other hand, this is simply a reworking of the same images the show has been running since its premiere. There’s nothing new here, really, except editing. (In all honesty, the falling man always brought to mind Black Monday or Tuesday for me, the October 1929 days when the stock market took a massive dive and was the starting mark of The Great Depression. A lot of stockbrokers jumped out of windows to their death after the stock market plummeted.) That being said, I tend to side with the poster at Reddit who shared the WetPaint article linked above by adding this parenthetical to the title: (Really guys?)

What do you think? Was the poster meant as a reference to 9/11?

PHOTO Belvedere Vodka treats rape as a joke in ad