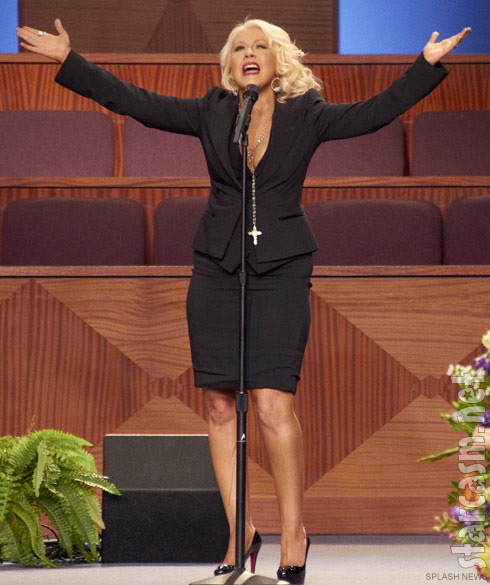 Last week popular music lost one of its icons when legendary R&B singer Etta James passed away at the age of 73. Christina Aguilera, who has said many times that Etta James was her number one inspiration, was on hand at Etta’s funeral today to say a few words and perform Etta’s most famous song, “At Last.”

“I have to first of all say what an amazing honor it is for me to have been welcomed here today – invited here, to pay tribute to the great Ms. Etta James,” Christaina began emotionally. “There’s a song that I’ve included in my tour now, for over a decade now, since the first time that I was able to have a world tour. And I went around the world for the past – throughout all my career – saying that Ms. Etta James was my favorite singer in the whole, whole wide world. And I would sing this song every night. Even to this day, there’s not a set list that goes by in a show that I do that I don’t include this particular song.

“It’s very emotional for me to sing it today, and this has meant so much to me. There’s a line in this song that says ‘I found a dream that I could speak to,’ and for me that dream all my life has been Etta James. I’ve aspired to sing like her, to be like her, to emulate her notes, and her passion, and the love for what she did. I could feel it.

“And out of all the singers that I’ve ever heard, she was the one that cut right to my soul and spoke to me. So tonight, Etta, this song is for you. This is called ‘At Last.'”

(The performance begins right around the 2:30 mark)

Here is a brief video clip of Christina Aguilera and Etta James together for an article in the July, 2006 issue of InStyle that paired up singers with their mentors:

In the article Christina stated, “Etta is my all-time favorite singer. I’ve said it for the last seven years — since I had my first debut record out — in every interview, in every story, in every on- and off-camera question. I mean, all of Etta’s old songs, countless songs I could name, I grew up listening to. That music was always such a huge escape for me, even from a young age.”

“There was such soul, emotion and raw heart in it,” Aguilera said of hearing Etta and other jazz, soul, and blues artists as a child. “So much real heart and emotion that’s lacking in music today. You used to have to sing and convey emotion, and now, well, technically you can do anything with technology. It sucks for music today, but that’s why that old music feels so good to me.” 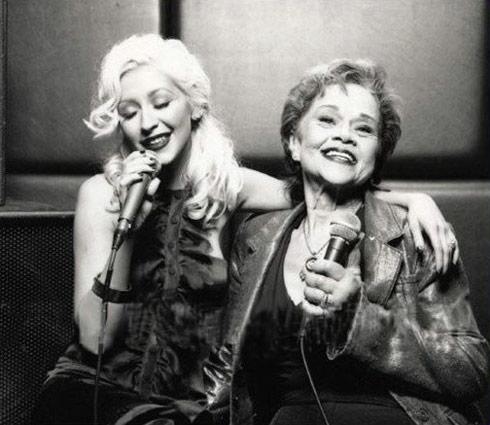 And much to Christina’s surprise, the admiration was mutual. “When I first heard her stuff, and I heard her say on TV, [in response to the question] where she got her style, ‘I grew up on Etta James,’ that made me feel so good,” James said of the blonde chanteuse. “The last person who said that was Janis Joplin, but Christina can sing. Janis was good, but there’s a difference in the quality of voice. I couldn’t believe that big sound, that big voice was coming out of her. Tell me who you’ve seen that sings like her, because we don’t have anybody.

“It’s like you were here many years ago,” she told Aguilera. “You don’t look exactly like them, but there’s something about you that’s like Dinah Washington, Billie Holiday, those kinds of chicks. I’ve never seen a girl sing as tough as you sing, as little as you are. It’s like you’re an old soul.”

“I’m going to cry now,” Aguilera gasped, and James put her head on her shoulder affectionately.

UPDATE – A commenter pointed out that Christina appears to have sprung a leak and has some sort of mystery liquid running down her leg. CLICK HERE to see more about that!

VIDEO Dad puts child in washing machine at a Laundromat