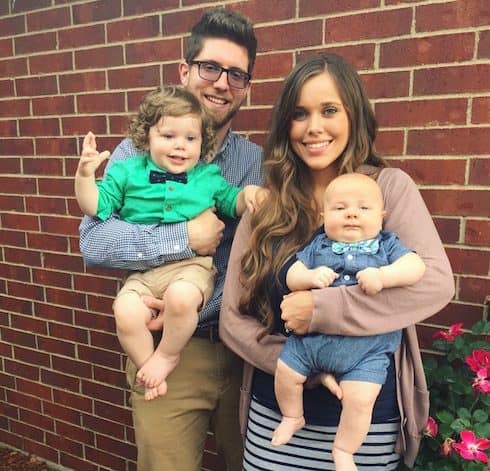 She and her husband Ben Seewald have been talking about the possibility for years — but is Jessa Duggar adopting a baby? The couple appears poised to add a third baby to their growing family, though if Jessa’s history of pro-adoption comments are any indication, they might not stop there.

Jessa was most recently in headlines thanks to widespread speculation she’d gotten pregnant just before the Counting On season premiere this past February. At the time, Duggar family observers were quick to note that it had already been a year since Jessa and Ben welcomed their second son, Henry Wilberforce, into the world. And Henry’s birth came just over a year after Spurgeon Eliot, the couple’s first child, in November of 2015.

More recently, Jessa has been trolling fans who follow her perma-alleged bump’s every move with a Snapchat pic that appeared to confirm pregnancy rumors of long-standing…that is, if you only looked at the top half of the image.

“Because I’ve been asked if I’m hiding a big of a bump… BIG ANNOUNCEMENT! Yes!,” Jessa wrote across the upper section of the extra-long pic. Then, winking, she added more information at the bottom: “But it’s currently a shrinking bump rather than a growing one. #postpartum #baggyshirts #thanksforasking”:

It’s worth pointing out one small, but potentially significant detail key to all foster-to-adopt placements. An unbreakable commandment of fostering is that parents are forbidden from posting photos of their foster children on social media. One reason is that technically, foster children are wards of the state where they reside; another is that sharing photos publicly would make it easier for the child’s biological family to track the child down.

The Duggars are prolific social media users, to be sure — but it wouldn’t be impossible for them to keep up their photo-sharing pace without letting slip any images that show a new child. It’s therefore a remote, but real possibility that Jessa and Ben have already been placed with a foster child, and are keeping the placement a secret until the adoption goes through.

Adoption appears to have been a viable option for Jessa and Ben for almost as long as they’ve been talking about having children in general. Jessa brings the topic up almost every time she’s asked about how many children she and Ben want to have — and it doesn’t look like that number has decreased, either. (Jessa once famously said, in all seriousness, that she’d “love to have fifteen sons,” and that growing up in a big family is something she wants to provide for her children.)

Jessa again brought up adopting when discussing she and Ben’s family plans for People. “Ben and I still have a deep desire to adopt, and it’s something we continue to look into,” she said, shortly before Henry’s birth.

Jessa also revealed that she and Ben “have also talked about fostering to adopt.” First, though, they needed to find a bigger house: “We’re already going to have two babies in a two-bedroom house,” she explains. “So I’m thinking, we’ll have to upgrade to a three-bedroom.”

Additionally, Jessa and Ben told Us that they were finalizing “paperwork and a home study” all the way back in 2016. It’s not known whether the couple decided to shelve those plans indefinitely — which certified foster parents can do, provided they remain certified — but Jessa certainly sounded excited at the time.

“We don’t know what the future holds,” Jessa explained at the time, “but as the Bible says, ‘Man plans his way, and God directs his steps. So we want to move forward with paperwork and a home study, and just be ready for however God opens those doors.

“We have many friends who have walked this road,” Jessa added, “so we have seen firsthand the amazing power of adoption. There are so many kids out there who are longing for the love of a family, and we feel strongly about opening our hearts and our home to welcome them in.”

Finally, the sleuths and speculators over at the Duggar Snark Reddit page recently made the point that it’s possible Jessa and Ben may have chosen to adopt their third child in order to give Jessa’s body more time to recover from her first two pregnancies.

Are 19 Kids’ Ben and Jessa Seewald adopting? Can they at such young ages?