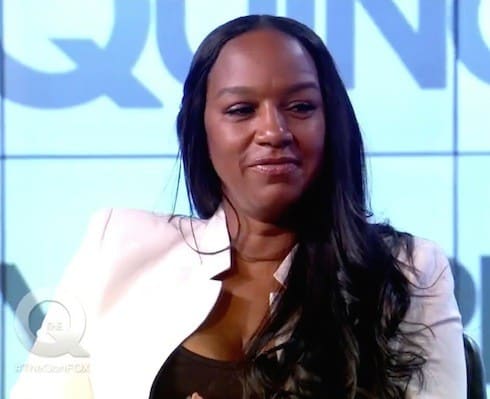 Before that, Takari continued to accuse Jackie of being an absentee mother, along with a neglectful and abusive one. (Takari also continues to share previews of her forthcoming memoir, Lights To A Shadow, in which she describes some of her accusations against Jackie in painful detail.) And Jackie’s already made a serious enemy among her Basketball Wives cast members in the form of Evelyn Lozada, whose $3,000 donation to Takari’s GoFundMe page last autumn set this whole storyline in motion.

So, when Jackie appeared on a Philadelphia talk show this week to rep her forthcoming appearance in an experimental play in that city, she also took the opportunity to state, without supporting evidence, that Takari has been suffering from depression her whole life–and that her depression is to blame for at least some of the bad blood between them:

The show’s host asked Jackie about the “things” that have been going on on Twitter, without making specific reference to any of the drama between Jackie and Takari Lee. In response, Jackie had the following to say:

I stand by everything on [the show]; it’s been theraputic for me…it’s a difficult journey, and you have to be real strong to be able to take the hits that you’re gonna get….My daughter suffers from depression. And I love her to death–she’s my firstborn. And, whatever she’s going through, I can just, as a mother, love her from a distance–and, together, but not publicly. And just support her.

(Jackie also prefaced her comments by referencing the producers’ role on Basketball Wives, remdining viewers that there are “eight to ten women” on the show trying to get their stories told at the same time. So “You’re at the beck and call of whatever [the editors are] willing to show,” she said.)

Takari’s response to Jackie’s claim wasn’t long in coming. She took to Instagram to fire back, and basically said that every part of Jackie’s reponse–and especially the part about Takari suffering from depression–is completely baseless, since, according to Takari, Jackie was never around to go with her to the doctor and find out about any diagnoses.

Unfortunately, Takari deleted her response shortly after posting it. Fortunately, we have the original caption from the post, courtesy of Bossip:

First off, I find it wrong for you to go on TV and diagnose me with ANYTHING!! You have not been to a Dr. Appt or mental health facility with me to know anything about my health Not even my hearing.
I totally understand being under pressure and needing a quick way to deflect an uncomfortable subject, but how do you do that by throwing me under the bus? Like I can’t respond back.
Out of respect I will always keep it classy and respectful, but taking my kindness and humble attitude for a weakness isn’t wise. Every phony medical condition, childhood “stories”and so forth will be addressed. So if the plan is to lie me away, good luck with that.
I’m shocked at the continuation of lies and false allegations against me and my family in an attempt to discredit me. I learned long ago to be skeptical of you and anything you do, so if your mother’s day text and Thank you text for my post was for your show I would not be surprised. Hard to imagine two days later, you would blatantly state an unfounded lie, that I’m depressed and need to be loved from a distance.
If you don’t want to own up to it, don’t talk about it. “No comment” is enough.
The continued concern on who does or doesn’t do for my kids, whose lives you are not apart of, is getting out of hand, too. Then, again we can talk about the past if you want.
P.S Dad says hello!
Would u like his number or should I give him yours?

Basketball Wives Season 6–and the ongoing fallout from Jackie’s reaction to Takari’s GoFundMe request–continues Monday nights at 9 on VH1.