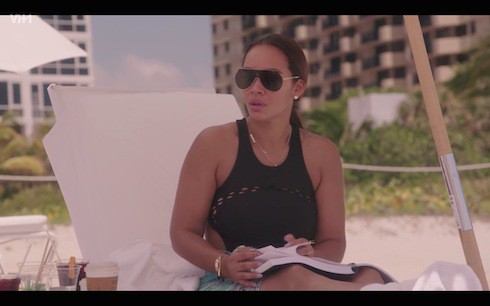 Jackie Christie’s estranged daughter continues to be the most dominant topic on Basketball Wives as its sixth season draws to a close. Takari Lee’s tell-all memoir–in which she details a childhood defined by what she claims was negligent and abusive mothering on Jackie’s part–has made its way into the hands of at least two cast members, and their reactions to the book will no doubt provide plenty of drama leading up to the reunion.

In fact, the preview clip provided by VH1 shows those two cast members breaking down in tears on the beach during an otherwise beautiful Miami day. Evelyn Lozada and Jennifer Williams are ready to meet with Shaunie O’Neal, but come bearing copies of Takari Lee’s tell-all for some light reading. (It’s also worth pointing out that Evelyn and Jackie have been beefing over Takari for months, ever since Evelyn donated to Takari’s GoFundMe last fall–and that Evelyn brought a copy of the memoir specifically for Shaunie.)

When the extent of Takari’s allegations hits the women, though, the tears start flowing:

Evelyn takes us through her thoughts as she goes through the pages: “[Takari] felt like, in her mind, that she was fat and we’re talking about nine years old. She said, ’My mother took take issue with everything about me. Why are you chewing like that? That bite is too big. Why are you breathing so hard? Are you retarded? What’s wrong with you, girl?’

“It’s like she couldn’t do anything right,” Evelyn continues. “You want your kids to feel beautiful and great, regardless of whatever flaw they have.”

Jennifer also points out that Takari describes writing a suicide note in her book–and that she says, specifically, that the note was her “first.”

In case you missed them, Takari has released several excerpts from her memoir, which you can read here and here. The Basketball Wives Season 6 finale airs Monday, August 7th; the one-part reunion special will air on the 14th.