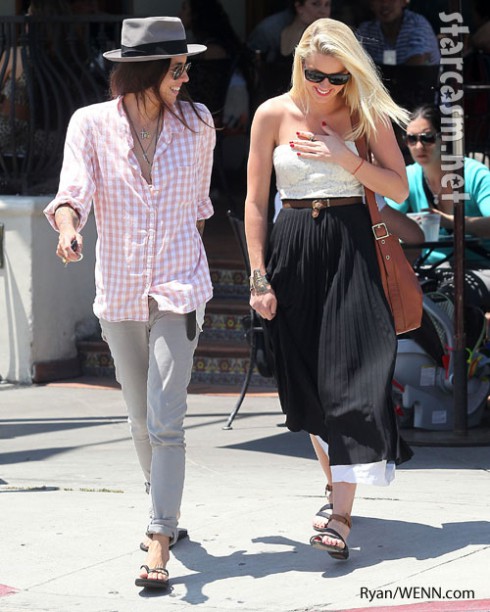 And insider told In Touch that Amber Heard and long-time girlfriend Tasya Van Ree had broken up several months ago because of Amber’s alleged fling with Johnny Depp (this fling was also thought to part of why Johnny split with his partner of 14 years Vanessa Paradis last month.)

It looks like Amber may have patching things up with Tasya, though. They were photographed laughing after a lunch at Urth Cafe in L.A. yesterday. Maybe they’re just sharing a good chuckle about all the tabloid stories.

Amber started dating the artist/photograph in 2008, but officially came out with their relationship (and her bisexual status) in 2010, bringing Tasya to the GLAAD’s 25th anniversary party.

Despite Amber and Tasya’s open friendliness, US Weekly is claiming that Amber’s relationship with Johnny Depp is 100% real. She’s been making regular visits to his Lone Ranger set, and Amber told Dazed magazine that playing Johnny’s love interest in The Rum Diary was “the best experience of my life. He’s such a wonderful presence; he is enigmatic and compelling and a true artist, seriously intelligent and incredibly sensitive.”

Would you be that friendly and giving with a recent ex from a long-term relationship? Maybe their relationship was just already past it’s time.