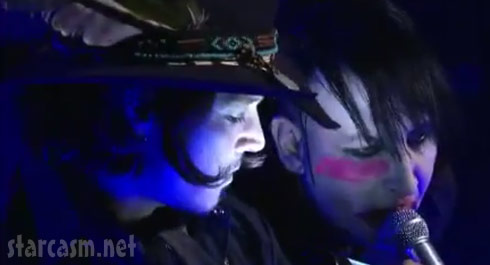 There’s a lot of peeps out there who have sweet dreams about Johnny Depp and some pretty harrowing nightmares about rocker Marilyn Manson. In a great performance from yesterday both of these things came together as Depp joined Manson on stage for a killer rendition of the Eurythmics classic “Sweet Dreams (Are Made of This).”

Manson howled out the song in haunted raised and lowered tones while Depp played it cool on guitar not looking to overstep his place on stage. Here is the full clip of the performance:

Depp sported a black cowboy styled hat that he pulled down over his face. In spite of Manson playing up to him during the performance many in the crowd were unaware that there was a bonafide Hollywood megastar in their midst. Missed in that clip was Manson letting the fans in on his big little secret: