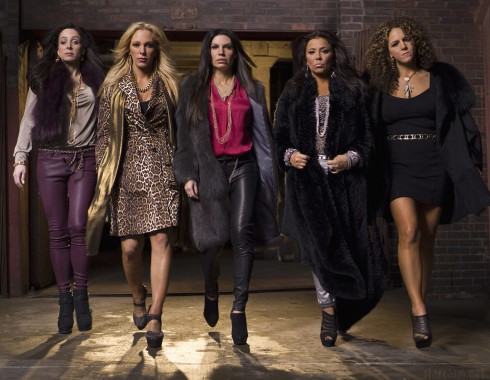 VH1’s original Mob Wives reality series was a huge hit, and I think at least some of that credit should go to the show’s marketing peeps who did a wonderful job of creating stylized visuals paired with one of the best (and fittingly badass) theme songs in reality show history. Now it appears that the same crew has taken on the task of handling the Windy City expansion Mob Wives Chicago, with similar results! In addition to great “police surveillance” style videography in the super trailer and the tough musical gem “Playing for Keeps” by Elle King, now we have the official cast photos of all the ladies – and they are wonderfully hyper-real and overly dramatic 🙂

In the group photo above we can see (from left to right) Nora Schweihs, Renee Fecarotta Russo, Pia Rizza, Christina Scoleri, and Leah DeSimone power walking in an industrial section of Chicago (The shoot reportedly took place at at 344 N. Canal Street, behind Cassidy Tire). The MWC Gang of Five strut strongly right in your face, awash in furs, animal print, leather pants, and high heels. That there is a drama freight train y’all!

And I love this “skyscraper” group photo! (A little marketing/ad joke there) 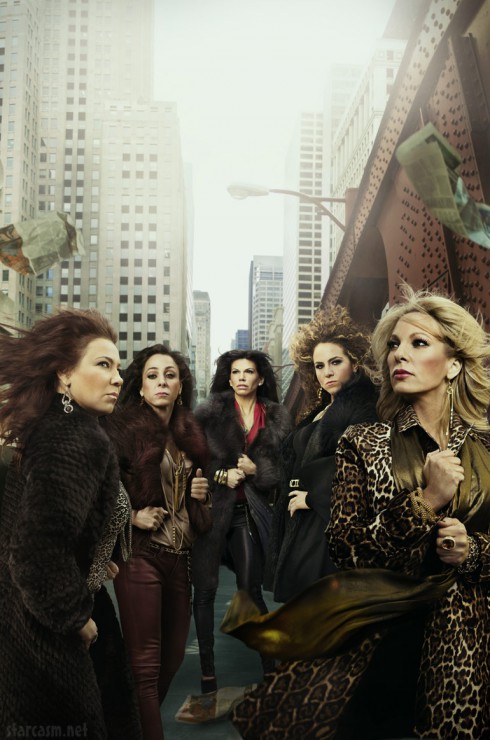 The “Windy City” theme is brought home with swirling hair and newspapers (most certainly containing crime headlines about the ladies’ families) as Chicago’s famous ‘L’ tracks rise in the background. (Bravo needs to take a lesson from VH1. The Real Housewives of New York City need a photo like this!)

And here are the individual Mob Wives Chicago cast photos with some biographical information thrown in for good measure. Be sure to tune in the to the series premiere on June 10 at 8 p.m. ET/PT on VH1! 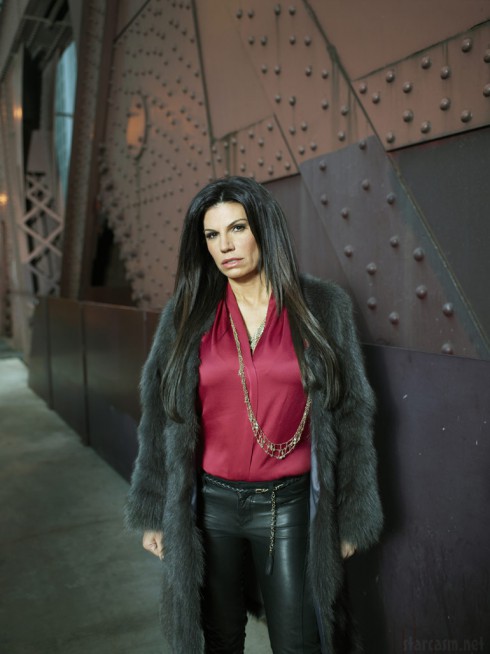 Pia is a trucker-mouthed tough girl who has had to struggle her entire life because of the actions of her father, Vincent Rizza, a Chicago policeman who worked for the mob. But not only did Vincent Rizza work for the mob, he flipped again and testified against them before entering the federal Witness Protection Program! So no one on either side had any respect for him, and Pia has had to fight to establish her own identity outside of the “rat shadow” of her dad. Her photo is the toughest of the lot as it looks like Pia could chew a person up and spit out rivets very similar to those used in the ‘L’ track behind her! 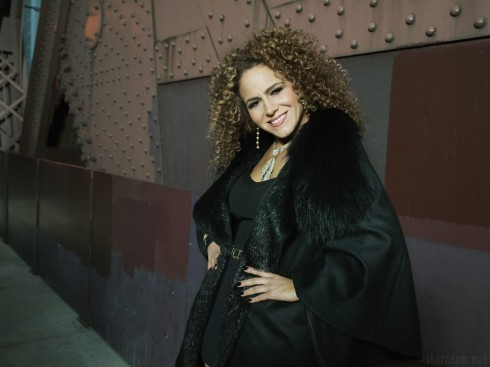 Leah is a rarity among both of the Mob Wives casts in that her infamous mob “associate” father, William “Wolf” DeSimone, is not behind bars. Now “retired,” Wolf keeps a protective eye on his daughter, who says she never knew what he did for a living growing up, and never asked. Ms. DeSimone looks almost joyful in her official Mob Wives Chicago photo as her glowing smile is framed in by some of the wildest crazy fun hair to ever grace the small screen! (I’m betting $20 that she gets that hair pulled in a fight at some point this season. Any takers?) 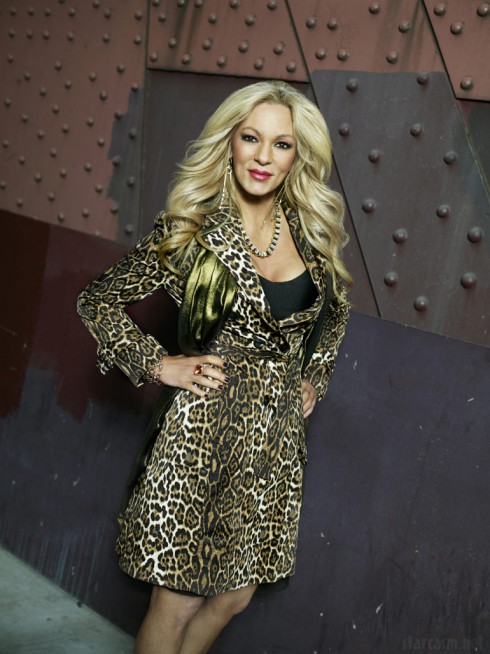 Renee’s connection to “The Unit” is her uncle, “Big John” Fecarotta, who raised her after her father died. Renee and “Big John” shared a very close relationship before the alleged loan collector and hit man was shot and killed by fellow mobster Nick Calabrese. Renee has taken a lot of what her uncle taught her and applied it to becoming a successful independent businesswoman. As far as the photo goes, Renee wins my overall Best In Show ribbon for her catty choice of attire: a knee-high, long-sleeved leopard print dress that looks nothing short of ferocious! Also helping Renee stand out in this esteemed crown is the fact that she is the only one with blonde hair. I guess we will see if she has more fun this season! 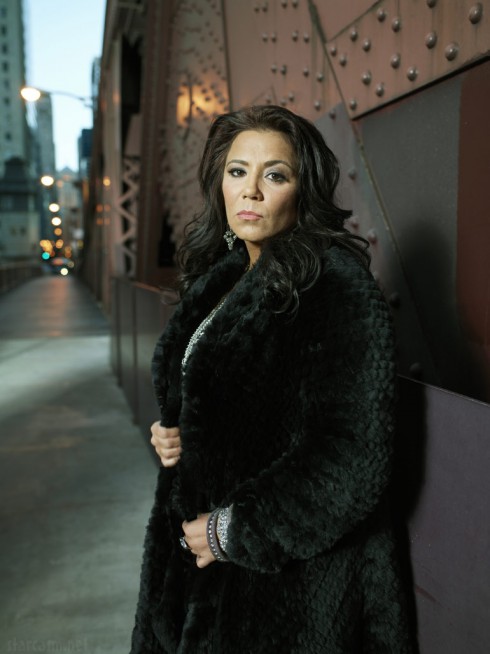 Christina father is one-time thief and alleged fence for the Mob, Raymond Janek. Like Leah, Christina’s dad is not behind bars thanks to going straight in 1987, which was after he had already spent a total of 20 years in jail off and on for various offenses. Unlike Leah, Renee and her father are not close. Christina wants to keep her father distant as she tries to provide a stable home for her nine-year-old daughter – something made more difficult by the fact that Christina is unemployed. But, being unemployed wasn’t gonna stop Christina from rocking a full-length fur coat as she too posed in front of the ‘L’ tracks looking only slightly less tough than Pia! 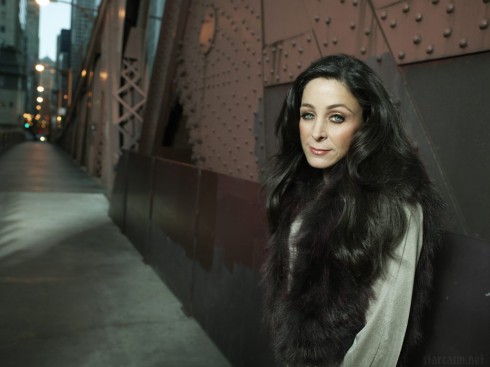 Nora’s father is notorious “alleged” Mob hit man Frank “The German” Schweihs, who was rumored to have performed a number of hits outside of the Mob as well, the most famous of which being Marilyn Monroe. (No joke! Read about it here.) It’s Nora’s father that brings her back to Chicago as she tries to learn the whereabouts of her father’s body after it was confiscated by government following his death in 2008. (She was in Florida where she had her own run-in with the law in 2004, getting arrested for DUI)

Nora still denies the allegations leveled against her father, and continues to idolize and defend him after his death. Nora, in stark contrast to her Mob Wives Chicago cast mates, looks downright vulnerable in her photo as she dons a black fur vest that almost appears to be an extension of her dark hair. Judging from the super trailer, I’m getting the impression that Nora is willing to get in there with the rest of these ladies and “mix it up,” but it appears as though she might be in a bit over her head.