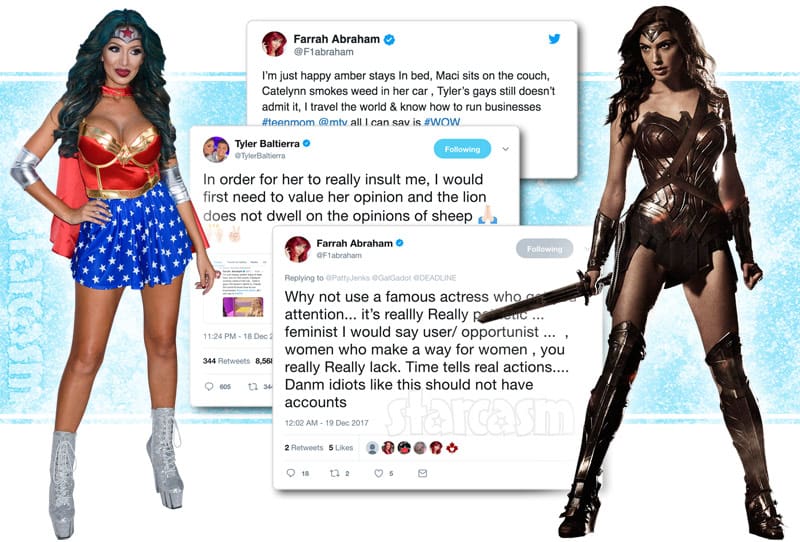 After her “fake firing” by Teen Mom OG producers at the end of October, Farrah Abraham continues to throw fuel on the burning bridge between herself, MTV, her Teen Mom OG co-stars and…Wonder Woman director Patty Jenkins?!

We will start with Farrah’s co-stars, who she collectively threw under the bus with a single tweet during Monday night’s new episode:

I’m just happy amber stays In bed, Maci sits on the couch, Catelynn smokes weed in her car , Tyler’s gays still doesn’t admit it, I travel the world & know how to run businesses #teenmom @mtv all I can say is #WOW pic.twitter.com/dg8K3iTOzC

And just in case Farrah gets tweeter’s remorse and deletes her message, she wrote “I’m just happy amber stays In bed, Maci sits on the couch, Catelynn smokes weed in her car , Tyler’s gays still doesn’t admit it, I travel the world & know how to run businesses #teenmom @mtv all I can say is #WOW”

She followed that up with another animated gif and a tweet about pregnant co-star Amber Portwood:

Did amber ‘s drug addict Friend show up for tv .. hope your not using while your pregnant lmao pic.twitter.com/5VvrYLb75q

Neither Amber, Maci, nor Catelynn have responded to Farrah’s outburst, but Tyler did offer up a non-response response: 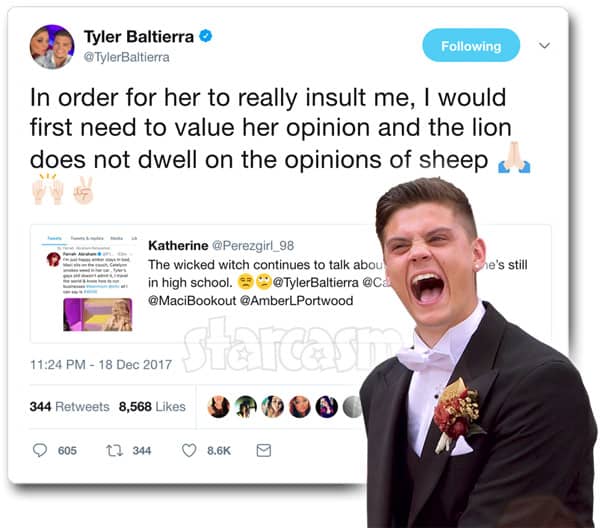 Sheep huh? That’s one animal Farrah doesn’t have (yet). If she does get one — even if it’s miniature — then I think we shall start calling her Farrah A-BAAHHH-raham. Wooldn’t that be hilarious? It’s a baahhhd joke I know, I’m just going for the sheep laughs here.

Farrah’s Twitter dissfest didn’t stop with her Teen Mom OG co-stars, however, as she later went after Wonder Woman director Patty Jenkins — or at least I think she did. Farrah was responding to this tweet by Patty, which includes a link to a Deadline article about how she and Wonder Woman star Gal Gadot hit it off right away and have been in complete sync ever since:

Really loved this article! Me and my girl @GalGadot = The best!! Thanks @DEADLINE Women In Hollywood: Patty Jenkins and Gal Gadot Made The Instant Connection That Gave ‘Wonder Woman’ Power https://t.co/py5pJAQTgw via @deadline 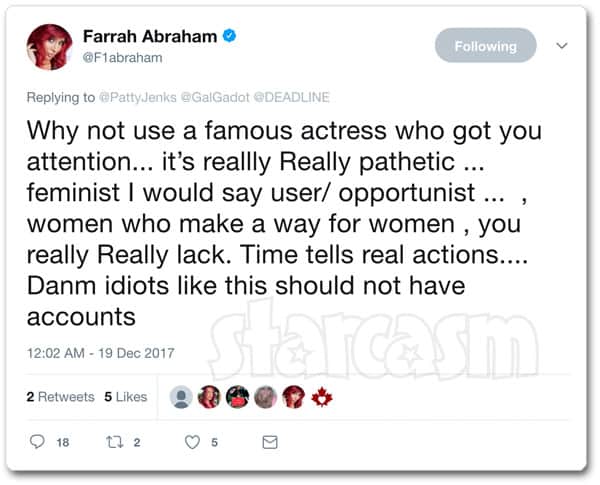 I won’t even venture a guess as to exactly what Farrah was trying to say there.

As far as Farrah’s Teen Mom OG status, she was recently asked about that by Perez Hilton in a Youtube collaboration video. “As far as I know I’m not fired,” Farrah says, “but we’re not filming.” So it appears as though the “fake firing” from show Executive Producer Morgan Freeman has resulted in an actual firing, as far as the end result of Farrah no longer being on the show. It is unknown what the network plans to do with Farrah in regards to this season’s Reunion Show. Since she refuses to film with her co-stars anyway, I’m giving it about a 60/40 chance that they will simply exclude her. That is PURELY speculation however!

Meanwhile, be sure to keep up with Farrah and her family (while it lasts!) with new episodes of Teen Mom OG airing Monday nights at 9/8c on MTV.