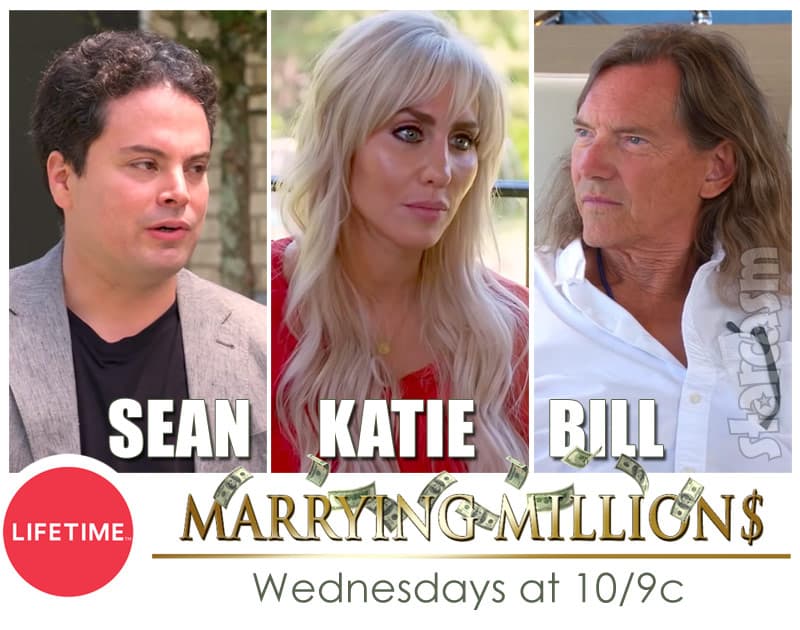 The producers of 90 Day Fiance and Love After Lockup have a brand new “love obstacle” reality series, but this time it isn’t international borders, miles, or prison bars that the couples have to overcome — it’s money! Lifetime’s Marrying Millions features six extremely wealthy individuals who are in serious relationships with partners who are dramatically less well off economically. (And often times dramatically less old as well.)

So how did all of the Marrying Millions “millionaires” make their money? I did a little research and will share details for each of them! The post got a little long, so I will be splitting it in half — starting with Bill, Katie and Sean. 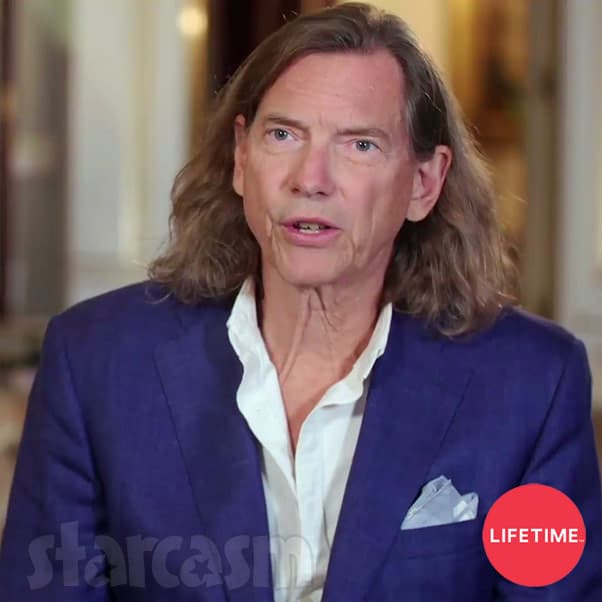 Bill (real name William) is perhaps the most bona fide millionaire in the cast. He was born in Detroit in 1958 and spent most of his childhood in Mexico where his parents were Methodist missionaries. Bill returned to the United States during his senior year of high school, and would eventually head to Dallas, Texas to attend Southern Methodist University.

Bill graduated from SMU with a Bachelor of Business Administration in 1980, and his first job was leasing commercial properties for retail.

In another four years, Bill was ready to be his own boss, and he launched Dunhill Partners, Inc. as a full-service brokerage firm. 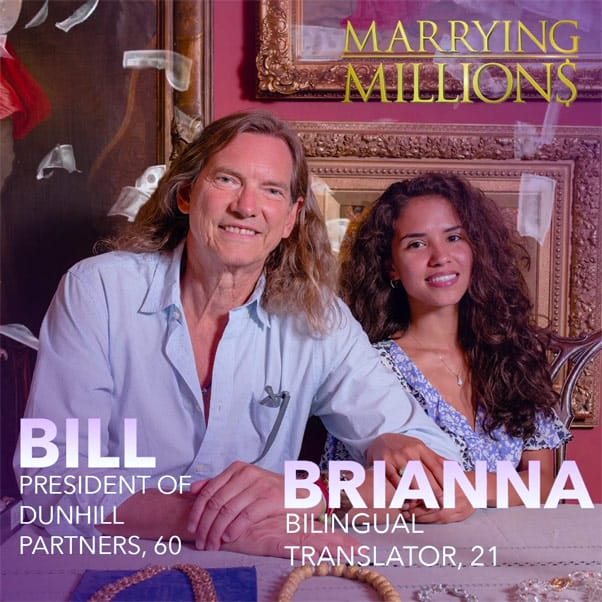 “In the mid-1990’s, Bill transformed Dunhill Partners into an investment company, acquiring commercial real estate and raising capital from outside investors,” Bill’s bio reads on his website. “Today, Bill is widely recognized for making Dunhill Partners one of the most successful and highly regarded commercial real estate firms in the U.S.” And that is not an exaggeration at all.

Bill’s love interest is 21-year-old former restaurant hostess Brianna Ramirez, which means their relationship will have a lot more to overcome than just a sizable earnings gap! 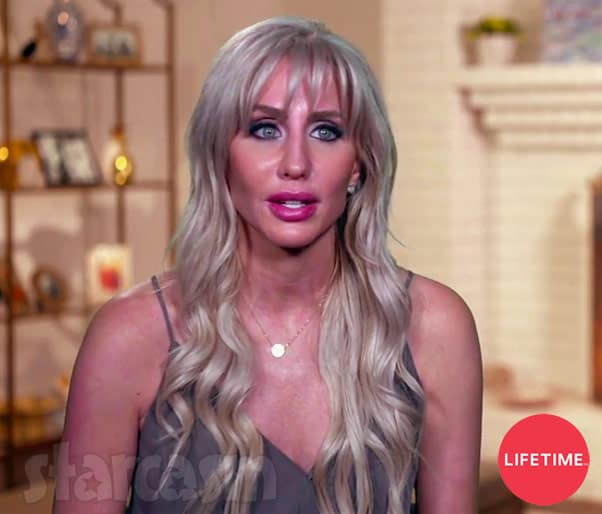 Right down the road from Bill is fellow Dallasite Katie Hamilton. Katie is no stranger to the concept of marrying millions, because that’s exactly what she did. Katie (maiden name Katie Chadwick) married major league baseball star Josh Hamilton in 2004. However, Josh wasn’t playing baseball at the time.

Josh was one of the biggest prospects in the game when he was drafted first overall by the Tampa Bay Devil Rays in 1999 at just 18 years of age. Josh was signed to a minor league roster and immediately showed why he was valued so highly as he was voted the 2000 Minor League Player of the year by USA Today.

Prior to the 2001 season, Josh was involved in a car accident. It was then that his troubles with alcohol and substance abuse began. Over the next few years he struggled with injuries and failed drug tests, and he was eventually suspended for an entire year by MLB in 2006. When Josh was at his worst, he met Michael Chadwick, who would help the troubled star get back on his feet and back on the field.

Michael’s Chadwick’s daughter is Katie. She met Josh while her father was helping him get straightened out and the two were married in 2004.

Josh would make his major league debut with the Chicago Cubs in 2007, and go on to have numerous all-star seasons before his substance abuse issues resurfaced after shoulder surgery in 2015. That same year, he filed for divorce from Katie in a move that garnered national headlines — partly because it was being reported that Bravo intended to add Katie as a cast member on The Housewives of Orange County. That didn’t happen, with many speculating that it was because of Josh’s issues combined with the pending divorce.

What’s really odd is that I spent a great deal of time and effort researching this couple and I could find no official confirmation that the divorce was ever finalized. I assume that it was, but like I said, I could not confirm it. It seems I wasn’t the only one having difficulties getting information as Josh and Katie were mentioned in a 2017 WFAA article about high profile divorce cases in Tarrant County not being accessible via the county’s online court search. 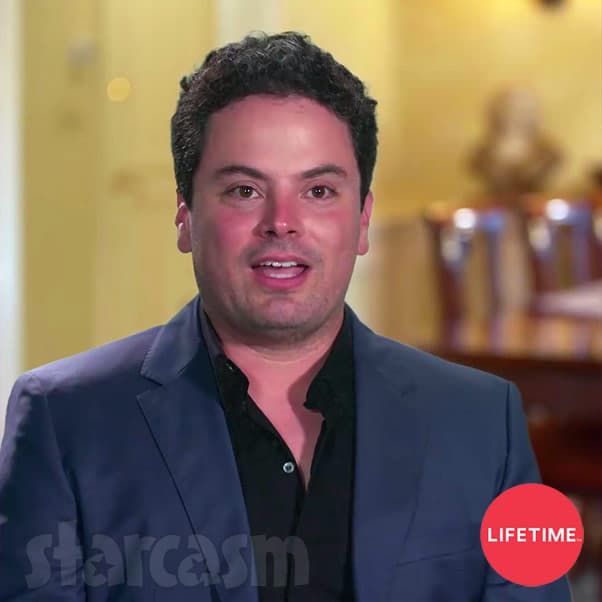 Sean’s Lifetime bio states that he is a “third generation heir to a successful publishing company” with “a net worth of over $30 million.” That successful publishing company is AUGE Media, which is surprisingly difficult to find out any information about. Their website doesn’t load, and the only actual books that I could find published by the company are local touristy photo books from various countries.

According to Sean’s IMDB bio, AUGE has also “published periodicals in over 50 countries under many different magazine titles such as Elite, The International Review, The Golden Guide, AUGE.” I was able to find some publications under those names, but the one I found do not look to be the ones published by AUGE.

I did find a series of “Revistas Life” publications with issues focused on different locations around the world. On the publisher info page, AUGE does not appear to be mentioned, but Sean Lourdes is listed as “Director Los Angeles.”

Sean is no stranger to the spotlight, especially after he was responsible for bringing the Dalai Lama to California for a two-day public visit. The event was sponsored by The Lourdes Foundation, which Sean founded and is the Director of.

The LA Times did an extensive piece on Sean back in 2014 titled “Young philanthropist draws celebrities, the Dalai Lama — and questions.” The lengthy article revealed that Sean’s public personae as a successful and wealthy humanitarian seemed a little less glamorous when you peeked behind the green curtain at bounced checks, unpaid loans, and unfulfilled promises.

Although Lourdes has operated largely on his own, his public profile could appear outsized. The Beverly Hills address listed as the “U.S. Headquarters” of his foundation is a rented post office box on Santa Monica Boulevard.

A letter of recommendation Lourdes showed prospective advertisers for his book lauds his “remarkable visionary prowess” and purportedly was written by former U.N. Secretary-General Kofi Annan, on U.N. letterhead. But Annan’s office said the letter was “clearly fake.”

Lourdes said he was shocked by that news. He said the Annan recommendation had been hand-delivered to him by a friend, who claimed to be close to the diplomat.

Also curious is the fact that Sean’s father, Emilio, retired from the publishing business in the late 1990s. The LA Times article reveals that he “had other investments — most notably four car-detailing outlets in Miami and a hotel in Mexico City.” I looked up the car washes, and they look like legit, high-end businesses that have been around for a long time. In other words, completely believable money making endeavors.

I mentioned above that Sean has an IMDB bio. He is credited on the page as the director for a 2013 episode of the TV series Secrets of the World titled ” The City of Angeles: L.A.” It was Season 1, episode 1, and there doesn’t appear to be any record of it anywhere else on the internet. The LA Times article mentions a book about Los Angeles that Sean was reportedly selling ad space for — I wonder if that grew into a film project? At the time of the article, the book was still in the works:

He also tried to quell concerns among those who had paid to be in his book on Los Angeles. Proposed publication dates had come and gone. Lourdes pledged it would surely be out by Christmas. A few weeks later, he moved the release for “Los Angeles: City of Angels” to the first quarter of 2015.

Getting Sean Reign Lourdes II into politics early ? thank you for a beautiful evening @hillaryclinton

I will be curious to see if the show will have scenes in which the parents of Sean’s 25-year-old significant other Megan confront him about some of the apparent shadiness highlighted in The La Times article.

Speaking of Megan and shadiness, the couple has a bit of a wince-worthy origin story. “Megan applied for a job at Sean’s company, but when he was 15 minutes late for the interview, she left,” reads the couple’s bio from Lifetime. “Sean looked her up on Facebook and struck with her profile, pursued her for the next year and a half until she finally said yes to a date with him. A son together and five years later, the couple is ready to walk down the aisle but many still question their relationship.”

Megan’s Linked In profile says she has been Project Manager at The Lourdes Foundation since January of 2013.

I will leave you with Sean’s rather impressive bio from The Lourdes Foudnation website. You will notice that it mentions a Los Angeles documentary and book, “both of which are nearing completion.”

Sean Lourdes is a futurist, a passionate champion for youth and social responsibility. As Chairman of The Lourdes Foundation, an organization dedicated to empowering others, and President of the 60-year-old publishing giant Auge Media, Lourdes leads with an indomitable Sense of Purpose. Inspired by a meeting with the Dalai Lama in 2012, Lourdes felt called to share his Holiness’ message of tolerance and compassion with others. Demonstrating rare conviction, with little more than a dream, a blessing, and a host of naysayers, Lourdes hosted two groundbreaking events, the largest at the Los Angeles Forum included 15,000 Angelinos and a group of 5000 children brought in by his foundation. Many thousands of lives were touched, even changed by this once in a lifetime opportunity and the Dalai Lama no longer addresses public audiences. Lourdes is following up the visit with a documentary, and a celebratory book on Los Angeles. Both which are nearing completion. 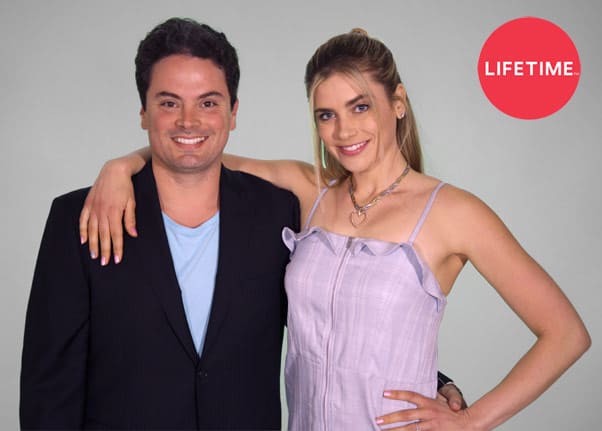 Humanitarian work might not be the expected path for the third generation heir to a global media conglomerate. However, Sean Lourdes’ life has never been typical. A mini ambassador, born in Los Angeles, growing up in Switzerland, Germany, Italy and New Zealand, the Lourdes family worked alongside Prime Ministers, Presidents, and Royalty. Through these early interactions Lourdes discovered all have the ability to inspire, and work for positive change. Finishing up his time in New Zealand, Lourdes attended the prestigious Kings School before matriculating at St. John’s Northwestern Military Academy back in the States. A B.A. from the University of Nevada, Las Vegas. Nevertheless, it is the culmination of all Sean Lourdes’ life and learning experiences that have deepened his resolve to identify and create opportunities for disfranchised youth.

Marrying Millions premieres on Wednesday, July 10 at 10/9c on Lifetime! (Stay tuned for our next update on the millionaires from the show, including Drew, Gentille, and Shawn!)