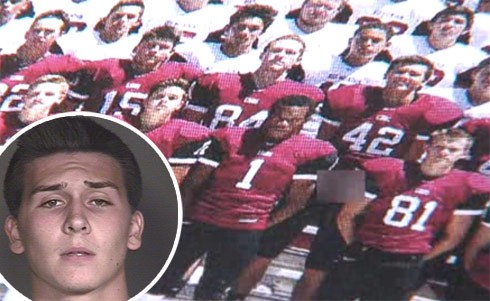 On a dare, Arizona high school student Hunter Osborn let it all hang out in his football team’s yearbook photo. His junk somehow managed to make it all the way to print unnoticed, and now the young man is in trouble with the law.

19-year-old Hunter Osborn faces a staggering 69 counts of indecent exposure after authorities accused him of flashing his genitals in the photo: that’s one count for each of the people present during the act. In addition, Hunter faces a felony count of furnishing harmful items to minors.

His self-exposure was not uncovered until after the Red Mountain High School Yearbook was handed out to nearly 250 students.

The image not only made the yearbook, it was distributed at football games as a promotional item.

When Osborn’s secret was finally revealed, the Mesa School District contacted the police and recalled the yearbook to “make a minor but critical edit for the inappropriate content.”

A Change.org petition argues that Hunter shouldn’t have his life ruined over a prank gone wrong. It reads, in part, “He was jailed on the night of his senior prom with 69 counts of indecent exposure, a class 1 misdemeanor, and a class 4 felony. He didn’t put the picture in the yearbook, he didn’t create the page, he wasn’t the editor that approved it, or the teacher responsible for publishing it and distributing it to students. The teacher responsible for the yearbook should be fired. Red Mountain High School is using him as a scapegoat instead of taking any responsibility!”