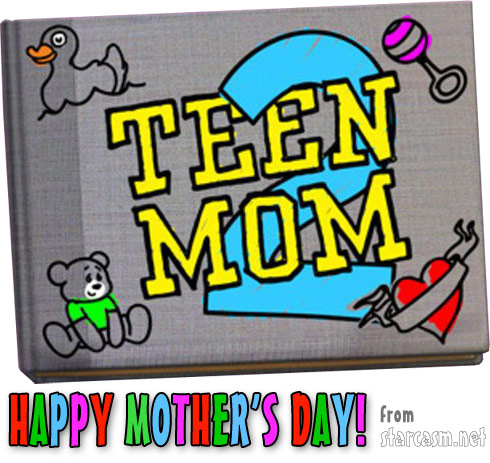 I just wrapped up the starcasm.net Teen Mom “Happy Mother’s Day” card with well wishes for the original MTV mommies and now I’d like to offer up some similar love and genuine admiration to “All the Single Ladies” of Teen Mom 2! I can’t believe we’ve only had one season following Chelsea Houska, Kailyn Lowry, Leah Messer and Jenelle Evans – it seems like we’ve been following their lives (and all the drama) for years!

First off, I’d like to offer up my apologies to the moms for being a wee bit late with their Mother’s Day card. I got caught up with other things (yes, even celebrity bloggers have moms) and then the initial Teen Mom card took longer than I expected. But, I’m thinking I still might make it under the wire for those living on the west coast! 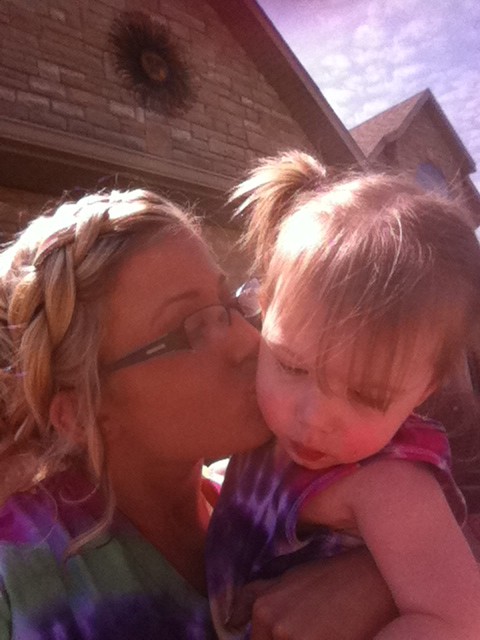 Let’s get this party started with the (former) party gal from South Dakota, Chelsea Houska! Chelsea gets a pretty hard time (somewhat deservedly I think she would admit) for giving baby daddy Adam Lind a second, third, fourth and fifth chance. But I’m human too, and lord knows I’ve had that not-so-special someone in my life who I fed second chances to like it was candy, so I’ve got sympathy for Chelsea – especially now that she has apparently cut the cord for good.

With Adam gone Chelsea seems to be loving life! She constantly updates on Twitter and Facebook and most all of her posts are fun and humorous featuring her latest hairstyle, latest leopard print fashion acquisition, and of course the latest adorable pictures of little Aubree Skye. She’s back on good terms with both her dad (Best Teen Mom dad?) and good friend Megan Nelson too. Man, who would have guessed going into the first season that Chelsea would wind up seemingly in the best situation?

So congratulations to you Chelsea for getting your sh*t together! I know you’ve said you weren’t any any kind of hurry to find another guy, but it’s just not fair to deprive the men of Sioux Falls a chance at true happiness with a wonderful girl and her wonderful daughter. (Now if he spends more time and money on his car than you and Aubree then you know what you gotta do!) 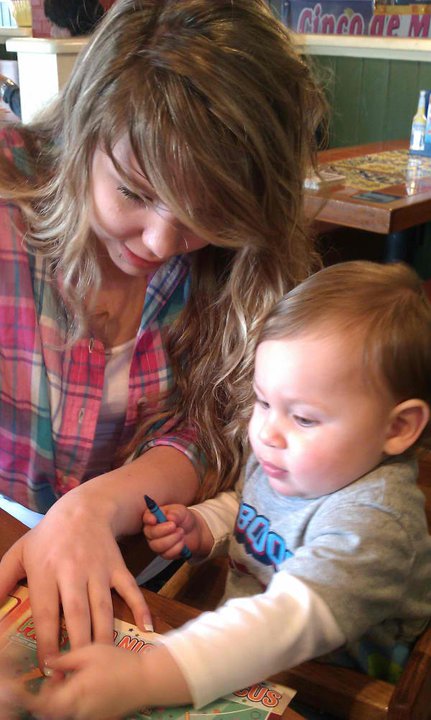 Let’s move on to Pennsylvania where Kailyn Lowry got caught up in a really unpleasant situation this season when she found herself living at Jo’s parent’s house even after she and Jo had a very unpleasant break-up. She caught a lot of flack for not seeming appreciative and respectful to Jo’s parents for giving her a place to stay, and she has since apologized for some of the things she did and said while living there.

That being said, something that people seem to forget is the brutal family situation that made Kailyn move there in the first place! Her mom was completely unsupportive (and seemingly a bit loopy to boot) and the scenes from her episode of 16 and Pregnant where she visits her dad in Texas was nothing short of devastatingly heart breaking. So when I look at Kailyn I see a young woman who comes from that kind of family situation and is now a teenage mother who is going to school, has a job, has a place of her own and has had the maturity to end the bitter feud with her baby’s father. That’s pretty damned impressive don’t you think?!?

On a sad note, it does appear as though Kailyn and her new boyfriend Jordan are having some difficulties. (Not to make anything harder than it needs to be, but I kinda liked Jordan.) Break-ups happen though, right? And they seem to be very amicable in their interactions on Twitter so I look at it as just another indication of Kailyn’s maturity.

I guess what I’m trying to say is that Isaac’s future is looking a lot better than it did mid-season with his parents going at each other tooth and nail and his mother not really having anywhere to go. I think it’s becoming clear now that he’s got a mom (and Jo seems to be doing better as well!) willing and able to provide him with a really great home. So just keep doing what you’re doing Kailyn 🙂 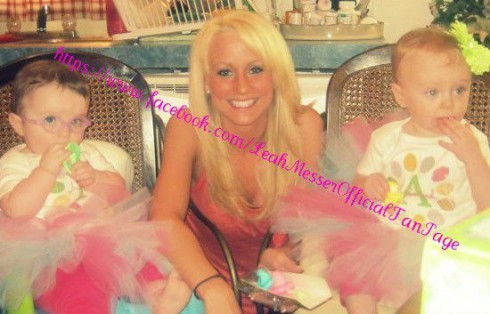 My heart really goes out to Leah Messer. I’m guessing that what we’re going to learn from Season 2 about her split from Corey Simms is that they kind of got caught up in the idea of a happy ending – just like the rest of us. Now Leah has to deal with raising two kids (no matter which side of the split you are on, most seem to concur that Leah handles most all of the actual parenting duties), going through a divorce and what looks to be a brutal custody battle, as well as Aliannah’s medical issues – all while the MTV cameras roll.

I don’t know what the real story is on why Corey and Leah split up, but I do know that Leah appears to be a wonderful, loving mother to Aleeah and Aliannah and I hope that things are resolved in a civil manner not only for the sake of the children but for their mom as well. If it helps at all Leah, know that you have a HUGE number of fans out here that wish you and your family the very best! Hold those two little girls tight and rest assured that this too shall pass 🙂 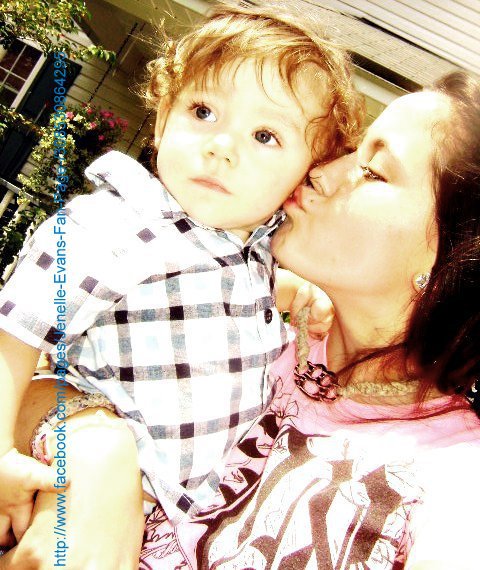 Lawdy lawd… Jenelle Evans. Where do I even start? I remember the very first post I did on Jenelle way back before her season of 16 and Pregnant even aired. Jenelle was featured in the trailer for the show and it was obvious her episode was going to be explosive to say the least! Here was my take after seeing the trailer:

Judging from the Season 2 trailer and from Jenelle’s various online profiles (links below), she is a very confident 17-year-old who uses colorful language, has an affinity for marijuana and absolutely no fear of conflict – which sounds like a perfectly volatile combination for the season premiere!

I would later use the words “foul-mouthed firecracker” to describe Jenelle (which still seems rather accurate by the way) and I remember going back to check for updates on her MySpace page and she had changed the description under her name to “Foul-mouthed firecracker.” So began my relationship with Jenelle 🙂

We’ve had a lot of folks leaving comments and making tweets about how we hate on Jenelle, but nothing could be farther from the truth! I’ve written a LOT about all of her various arrests, affinities for illegal substances, trips to McDonalds, trips to Los Angeles, trips to court and trips to Buddhist monasteries – but anything negative I have ever said about Jenelle was genuinely out of concern. I think she is self destructive. I think she does make bad decisions when it comes to who she hangs out with. I think she does have a lot of growing up to do if she wants to regain custody of Jace. She might be reluctant, but if pressed, I believe Jenelle would agree with me.

To be honest, I kind of like Jenelle. I think she’s incredibly bright and has a great sense of humor – she’s just immature. I don’t know how else to put it. That being said, let me make a Mother’s Day resolution to take it a little easier on Jenelle in the months to come. The girl’s doing community service, she’s living at home where there is still a lot of tension with her mother, she’s on a very strict probation that won’t allow her to hang out with a large number of her friends because of legal issues in their past, and to top things off, her parole officer lives on the same street.

So I think you deserve a break Jenelle. I’ll still be obligated to write a post if you beat someone up or visit a mosque, but I’ll try to be a little less Barbara-ish when writing it.

Hmmmm… I was just thinking that if I were in a bar with Jenelle Evans and somebody started talking crap to her I would definitely get up in their face about it! (And the same could be said for any of the other Teen Moms for that matter!) Well, unless it was a trap by some of Jenelle’s former friends so they could sell the video…

Anyways, you get my point. Happy Mother’s Day Jenelle, from your buddy Asa at starcasm.net 🙂

Oh, and Jace sure seems like he’s doing great! Downright adorable I would have to say: 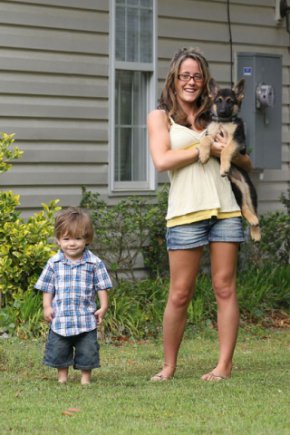