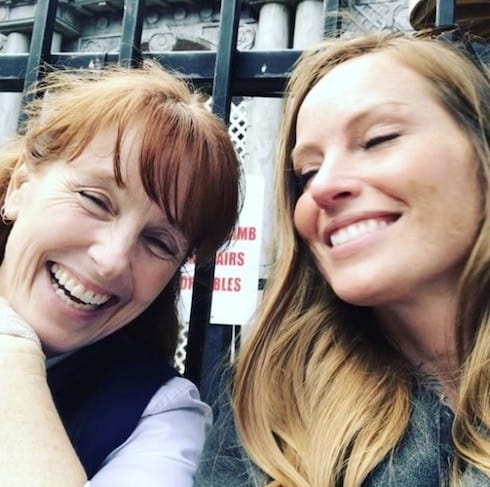 Karen and Mina, the mother-daughter duo behind HGTV’s always-charming Good Bones, have been hard at work on their latest Indianapolis home renovations over the past few months, and have been slowly offering up an HGTV Good Bones Season 2 preview in the process. What should fans of the first season expect? Well, for one thing, the long wait for new episodes is nearly over–the pair confirmed via their official Two Chicks and a Hammer Instagram account that the premiere date will be sometime this May:

Can you tell what's missing in this weeks #sneakpeeksunday FLOOR JOISTS!!!! Every single one had to go in this little historic gem ? But don't worry, we'll put her back together, with all her original glory. Season 2 premieres this May. Hold on just a little bit longer! We're working hard ?

Plus, it’s been a busy “off”-season personally as well as professionally. The Women’s Image Network nominated Good Bones in two categories at this spring’s Women’s Image Awards! Unfortuntately, the show came away empty-handed, but the nominations are a huge honor all by themselves–especially given that Mina and Karen’s industry of choice remains pretty dude-heavy. (Though it also stands to reason that HGTV and DIY are helping to change that.) So, congratulations to the Good Bones crew, and better luck next year!

Hey Two Chicks Fam! We’ve been nominated for two Women’s Image Awards by the Women’s Image Network (WIN)! The Women’s Image Awards were launched in 1993 to celebrate media that advances the value of women and girls. Women represent 53% of the world's population and make 85% of the purchasing decisions, yet according to the UN Development Fund for Women, women perform 66% of work globally and produce a full half of food globally, but women earn 10% of what men earn and own 1% of global property. We are honored to be nominated by a network that celebrates women and the hard work they contribute to the media industry. We are nominated in the categories of "Reality Series" and "Actress in a Reality Series". It's a privilege to be nominated in the company of our fellow @hgtv sister @joannagaines, the K Bella Twins, and Jazz Jennings in the "Actress in a Reality Series"! #winawards

In addition to the above news, Karen and Mina recently did a quick Facebook Live Q&A with fans while driving back from a home show. The whole thing is pretty silly and worth your time if you’re jonesing for some fresh Good Bones-style laughs, and we’ve embedded the video below. If you just want the most crucial details, though, here you go: Good Bones Season 2 will feature thirteen (13) episodes, an increase from Season 1’s ten.

And HGTV has given the show a tentative premiere date, though Mina explained that she’s been sworn to secrecy as to what that date actually is. Which is fine, since we can extrapolate for her 😉 Mina did say that “late May” is the current target for the Good Bones Season 2 premiere. If HGTV keeps the show on Tuesday nights, we’re going to get a premiere on either May 23rd or May 30th. And, given HGTV’s propensity for debuting new seasons of its biggest shows right after major holidays–it’s called the Fixer Upper formula–it seems plausible to pencil in May 30th, right after Memorial Day.

Finally, you can now check out Two Chicks and a Hammer on Snapchat, if you’re so inclined. And make sure you’re already following them on Instagram for the latest Good Bones-related news and mischief.